The place to show off and tell us all about your XMs (or even other cars). Should it be a big project, or just some general pics, start your thread in here.
Post Reply
2169 posts

Hello from Cheltenham!
My name is Russ and I've finally joined the forum having recently bought (after a long wait) a 1992 K reg MK1.5 2.1 TD SED Auto Hatch in a colour I can't identify. It's slate grey blue in dull weather, but green grey in the sun! I'll upload a pic when I can.
RP number 5705 if anyone is interested! ....and I already need some advice!!!!

If you don't mind I'll post my issues here, I have looked at older posts but can't quite find what I'm after. I'd love to know what you all think. It was quite extensively re commissioned after spending some time of the road. Engine has been out ect. But in the last week I am experiencing some electrical glitches. The fuel gauge was working fine, but is now either showing empty with light on, or confusingly a low amount of fuel, even though yesterday is was just under half a tank. Checked the sender unit plug... all is well. Am i right to suspect the dash display soldering joints, as the auto gear LCD did misbehave a little the other day and I have already had the dreaded ABS light (flicker) and message appear. However that has now disappeared! the other issue which did fix itself was the glow plug light that didn't come on. But now works fine again. Very odd!

I also have one more thing. Now I know diesels shake rattle and roll. But has anyone experienced a very shaky / quite strong vibrations (car really shakes) when in drive as the car idles/creeps, but calms down when I accelerate. This also seems intermittent, as it wasn't doing it yesterday or on other recent drives, but has done it before and does not seem to be related to engine temp. All readings fine. It was really noticeable today. It's had new belts, water pump, tensioners ect. The car has also had a new rebuilt auto box quite recently and drives very well indeed. The engine idles normally and if taken out of drive into Neutral or park, it calms down. Any thoughts?

Sorry to introduce myself and then dive right into my XM's 'issues'. I'll post in the relevant sections next time.
Look forward to chatting with you all, and hope someone can shed some light on my problems!

Welcome to the club Russ and well done for picking up a nice early SED! It happens that my passion is series one 2.0i turbo and V6 models, but I am sure someone will be along soon with diesel advice. I think the colour is most likely to be the same as my 1992 model SEI (see attached photo), generally known as Anthracite with the code ETC. The paint code can be found in the engine compartment just below the battery, or in the Maintenance book if you are lucky. I hope you get your problems fixed and look forward to seeing some photos in due course. All the best, Matthew T.
You do not have the required permissions to view the files attached to this post.
1989 V6 Exclusive (Poland car)
1990 V6sei auto (grey auto)
1990 V6sei manual (gold car)
1990 V6.24 Pallas (Germany car)
1990 V6.24v (Scotland car)
Other previous XM sold and broken too many to mention!
Top

Welcome.. and well done for choosing the best eira of model.. though your isnt prooving the exact point..

s1.5 cars in my opion are the useually the best ones to go for. the suspension useually always works correctly at least. ive got an sed 2.1 too in manual form but its an earlyer H reg car in manderin.

the 2.1 is one of the best engines available they are strong and good for milage. i do find the auto box does blint the performancw slightly.

The vibration is an odd one.

The problem with intermittent problems is nailing them down and getting the fault to
manifest itself when seeking professional opinion/feedback or getting some kind of
consistency with the fault. For it to vibrate through the car, it has to have some direct
transmission of vibration/torque etc from the engine/gearbox or exhaust onto the
engine mounts or bodywork. Only other thing I can suggest is the innards of the box?

I wonder if the layshaft intermediate bearing on the offside (driver's side) driveshaft
get's warmed up and a bit grumpy? It would've been disturbed when the autobox was
out and sometimes takes a bit of abuse to get it out of the intermediate housing.

With the fluctuating fuel gauge have you tried the time honoured expert twack with
the palm of your hand to the general upper cowl housing above the instruments.

The ABS warning could very well be the connections on the sensors - let's face it,
the recent ropey British 'Summer weather' has probably got all manner of sogginess
and crud into the wiring and/or commutator ring on the hub and a good clean may
put things in a happier state.

Hope these issues don't mar the enjoyment of the car in the early honeymoon period
of your ownership! You can't go far wrong calling in here and saying 'hi' for a start!!
Top

Nice car, how did you manage to find a S1.5 SED knocking about, well done.

The colour might be as Matthew says, Anthrecite, but it could also be Mercury.

For the vibration it is likely to be either too slow idle speed or worn engine mounts. The o/s mount is a hydraulic mount, which do split and leak the oil out.

The glowplug light will be the relay, my cobalt one does it occasionally, but is getting better now the car is used more, it had also been standing for years.
Don't worry about it becasue the glowplugs are still being energised, just count to 5 then turn the key.

Hi everyone. Thanks for your warm welcome and advice so far. I'll get some pics of it for you all. The colour is rare apparently..... It's currently filthy from dust and rain so not looking it's best!
It has the wood and black leather interior, very nice condition too, but no cruise control. One less thing to go wrong!
It's not perfect, some things don't work on it (electric mirrors for example), but it is a strong one. No rust and has been under sealed. Done 130K.

I think my unusual vibrating issue could be an engine mount, unfortunately. But with the engine having been out, I would have thought it would have been spotted. There was oil on the road which could make sense. It is an odd one i admit. But today it was really quite strong. Yet yesterday, it was great.
I'll try out out all of your suggestions for the other issues. I'll keep you posted.
Thanks again

nice to see another gloucestershire XM

our local specialists are at Chalford and Cambridge, and my local garage in Longlevens is used to my ones.

Hello everyone. Sorry for the delay in getting pictures uploaded. I have been busy reconnecting a loose windscreen washer pipe!
Thanks very much Messerschmitt owner for your tips on where to get it serviced ect...I think I already need their assistance.
It is great to have another Xm back in Gloucestershire. There used to be quite a few living within a 2 mile radius of our house in the 90's. Mostly SEI's too. Funnily enough I saw another mk1.5 Mandarin red..possibly SI/SD off the Golden Valley roundabout (Cheltenham end) bombing off towards Staverton yesterday.

Well I am pretty sure the colour of mine is Anthracite. Thanks very much Matthew for posting a pic of yours to confirm it.
Here she is below. Oh and I have uploaded my oil leak too. Anyone else think this is from the Sump Gasket? I say this only because, the oil isn't seeping from the sump plug, it appears from further up between the gearbox and the engine from the sump bolts, and it is not red like the Autobox fluid. Me and a fellow Citroen friend had it up on some ramps to check yesterday. We both think it is engine oil and gets worse as the engine heats up. Seems quite conclusive to me as the oil level is starting to creep down a little,.. but would appreciate your opinions.
All the best
Russ 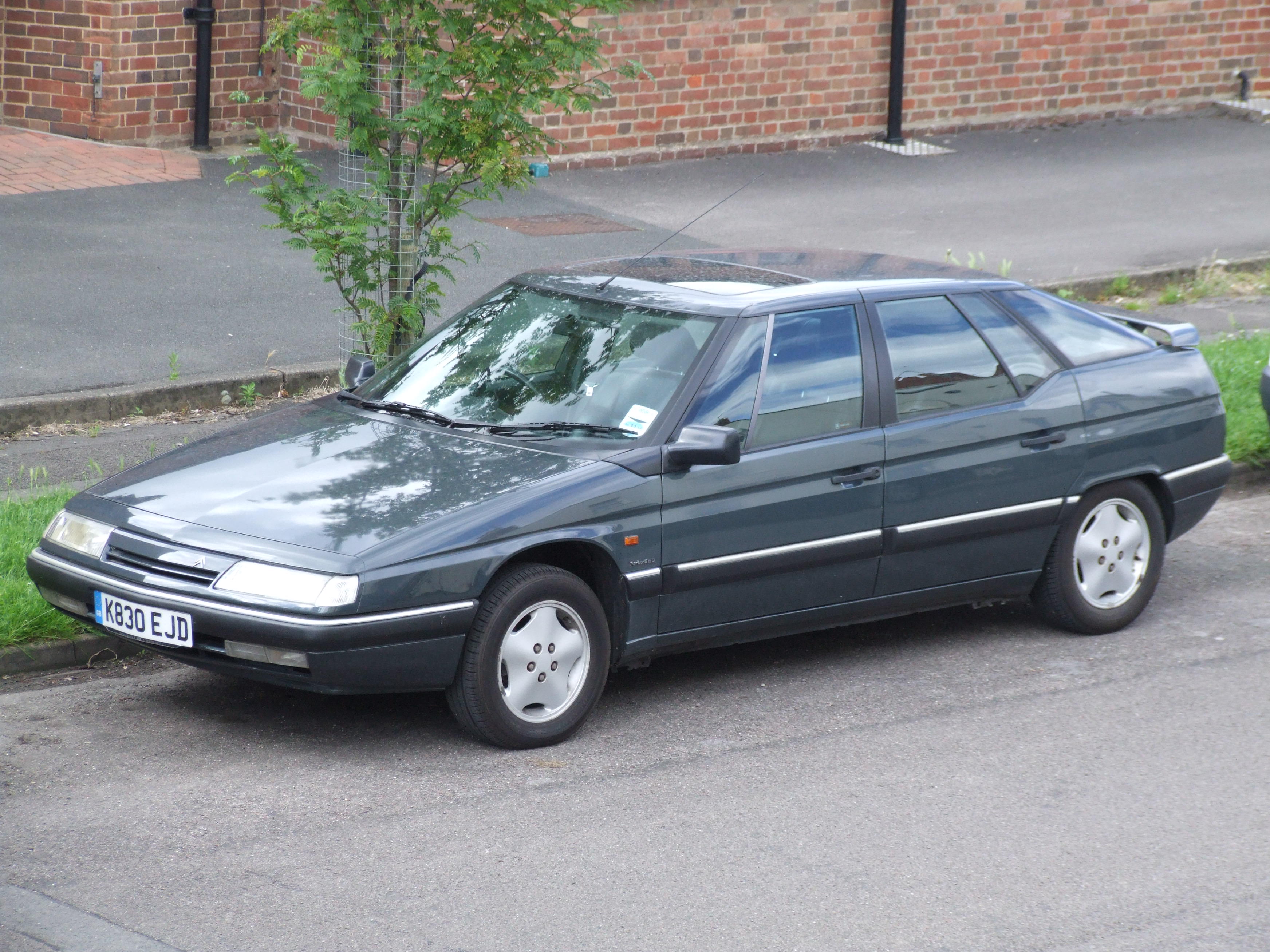 At a guess I would say that is from higher up than the sump gasket, possibly the cam cover gasket.

As I suspected that is a matching pair to mine Russ! My sei should also be on a 'K' plate strictly speaking, but there is 18 months between the RP number and registration! Just out of interest could you check your colour code and RP and what is the registration area code, ie. KLP.... The car certainly looks in nice shape and hope to see you at a future rally. With regards, Matthew T.
1989 V6 Exclusive (Poland car)
1990 V6sei auto (grey auto)
1990 V6sei manual (gold car)
1990 V6.24 Pallas (Germany car)
1990 V6.24v (Scotland car)
Other previous XM sold and broken too many to mention!
Top
Post Reply
2169 posts