Very impressive work Will and interesting to see the anatomy of the sills. Quite scary how it hides that kind of corrosion.
Russ

They can even bend 'from new', as John described. Only suitable for a dead-vertical lift, and not for lateral force. One of ours was bent by a tyre depot within a year of first registration. You're right about rust weakening them further. Once bent, the paint/sill protection also cracks, which makes them vulnerable to weathering.

Since getting the engine running on this car it has a fault where the Lambda sensors throw a code. Initially this was pretty continuous, but after significant work it is only if the engine has been left idling from to get fully warm.
The idle is a bit lumpy when running in closed loop, but becomes smooth when the ECM light comes on and the ECU switches to open loop.

The list of works includes testing and changing both lambda sensors, (twice for the front one).

The only item I can't guarantee yet is vacuum, as my gauge is faulty (new one on order), but a pressurised smoke test revealed only a very slight leak at the front throttle spindle, so I doubt that is an issue. When the idle bypass hose is blocked sharply the engine stalls immediately, hence I don't believe leaking air is the issue.
All intake and exhaust smoke tested.

I checked the Lambda sensor outputs with a scope and the front one indicates a lean mixture, which is comensurate with the faulting idle.

I need to check compression, but don't think it's that as the engine is smooth and appears to have compression when cranking.

Fuel pressure seems to remain when switched off, and I can't see low pressure affecting idle but not running.

I have read through Dean's thread and note his faltering was HT related, but that was when under load.
I haven't changed the IGN module or coil as the spark is strong and the engine runs well, apart from the faltering idle.

I changed two duff injectors and serviced tham all.

I haven't been able to road thest the car.


Vac appears good, as it meets Citroens recommendation that the engine revs should fall below 500 Rpm when the idle bypass is blocked.
Injectors are good
All wiring is good The loom is a bit aged and has some cracking insulation near some connectors (TPS, CKP, engine position, Water temp sensor), but I don't believe there are any electical conductivity issues, as I have measured the signals at the ECU.
All sensors are good. New Coolant temp sensor, MAP sensor tested with Vac, TPS measures less than 0.5v at throttle closed.
O2 sensor ok. Tested and replaced.

The fault behaves like a vacuum leak, whereby the greater the air restriction, the more exacerbated the issue is.

I'll perform a proper compression test this week and a vac test when a new guage arrives. The ease of starting and lack of smoke indicate it isn't a compression issue.

Matthew, you had a contact for cheap ECU's. Do you know if they have any for a prV6-24?
Does anyone have a wiring loom spare?
Also required is a V6 dipstick...or accurate measurement so I can make a new top for mine. I don't think this is the running issue.

What version of Lexia hardware and software is needed to retreive live data from a Fenix-4 ECU? Can the later, W10/USB software run a Mux that will communicate with Fenix-4? 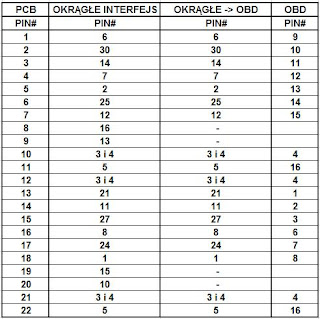 Next known failure was the speedo cable. I knew this was duff as I pinched it for the Cobalt car when that snapped.

Having found the speed sensor amplifier isn't working, it was back to a mechanical setup, for now.

Use a 30mm webbing strap as a taper, tie it on AND tape it right over speedo connector. Keep feeding it through from the engine bay and pulling through from the binnicle area alternately...and voilla. 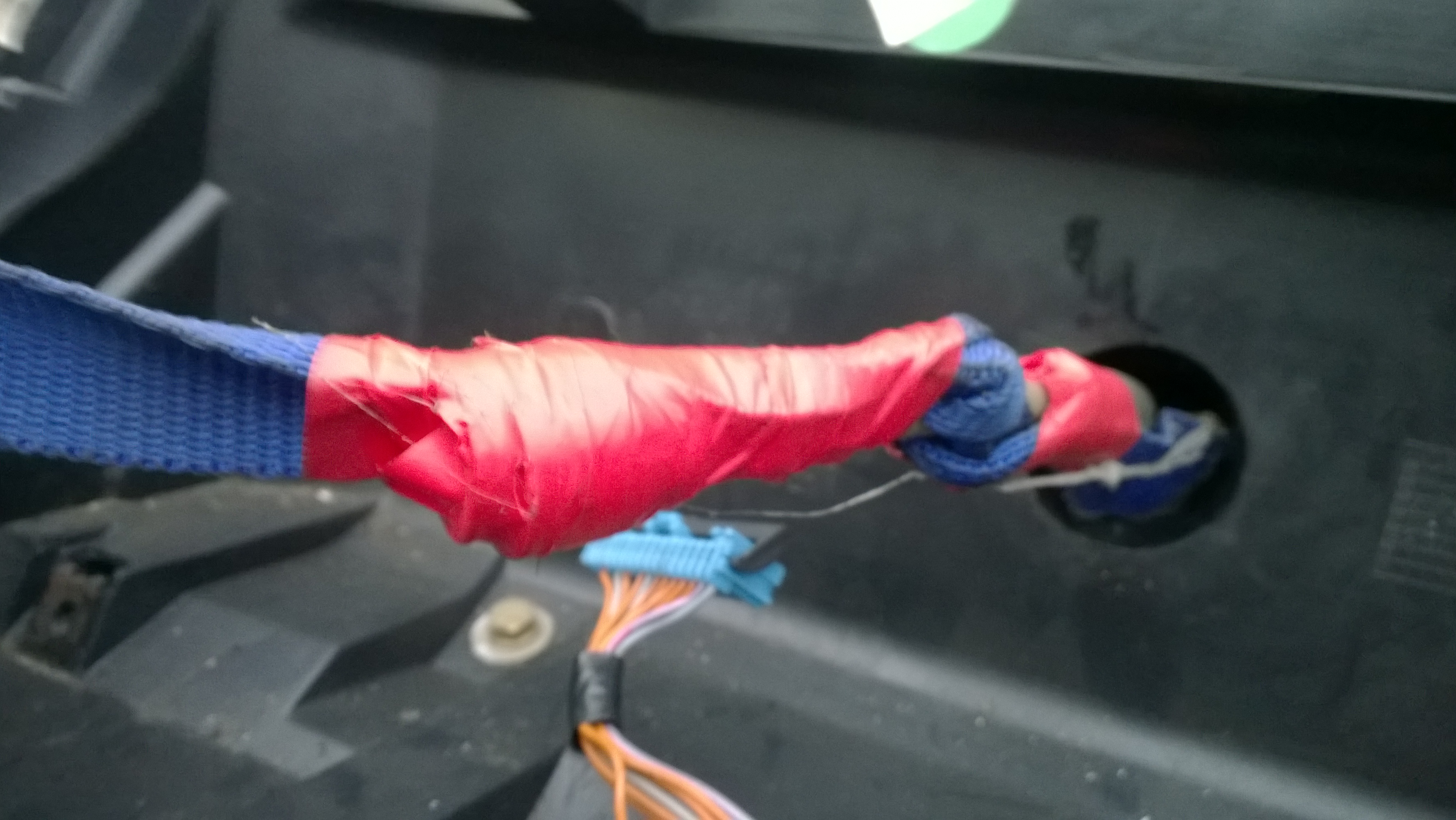 On a right hand drive XM, if you forget to pull a taper through from the binnacle to the engine bay as you remove the existing cable, you are stuffed..it is probably a dash out job to fit a new cable.

For the first time on this car the ABS light stuck on. Ignition on, lamp flash once only then stayed on. Checkk the codes, code 22..relay. Thanks to misha's tip I went straight for the relay board solder joints. It turned out to not be quite this problem, but it was the relay.
One tip. To save time, i heated and plastic welded the case back together. Don't. As it cooled, it warped significantly.. At least the relay won't shake and crack the solder joints.

Both steering rack gaiters were ripped and the pinion valve was leaking.
10 minutes later we have new gaiters and the rack all good...maybe not, as changing the passenger side gaiter means removing and stripping the rack down completely...which means dropping the subframe.

Due to the pinion valve leaking I elected to swap the rack for one I had, but stripped it and fitted a new passenger side gaiter. The driver one was a recent genuine Citroen gaiter.

Old rack and pinion valve. motorgnome, note the condition of the hydraulic ram...after 10 years sitting outside in undergrowth. 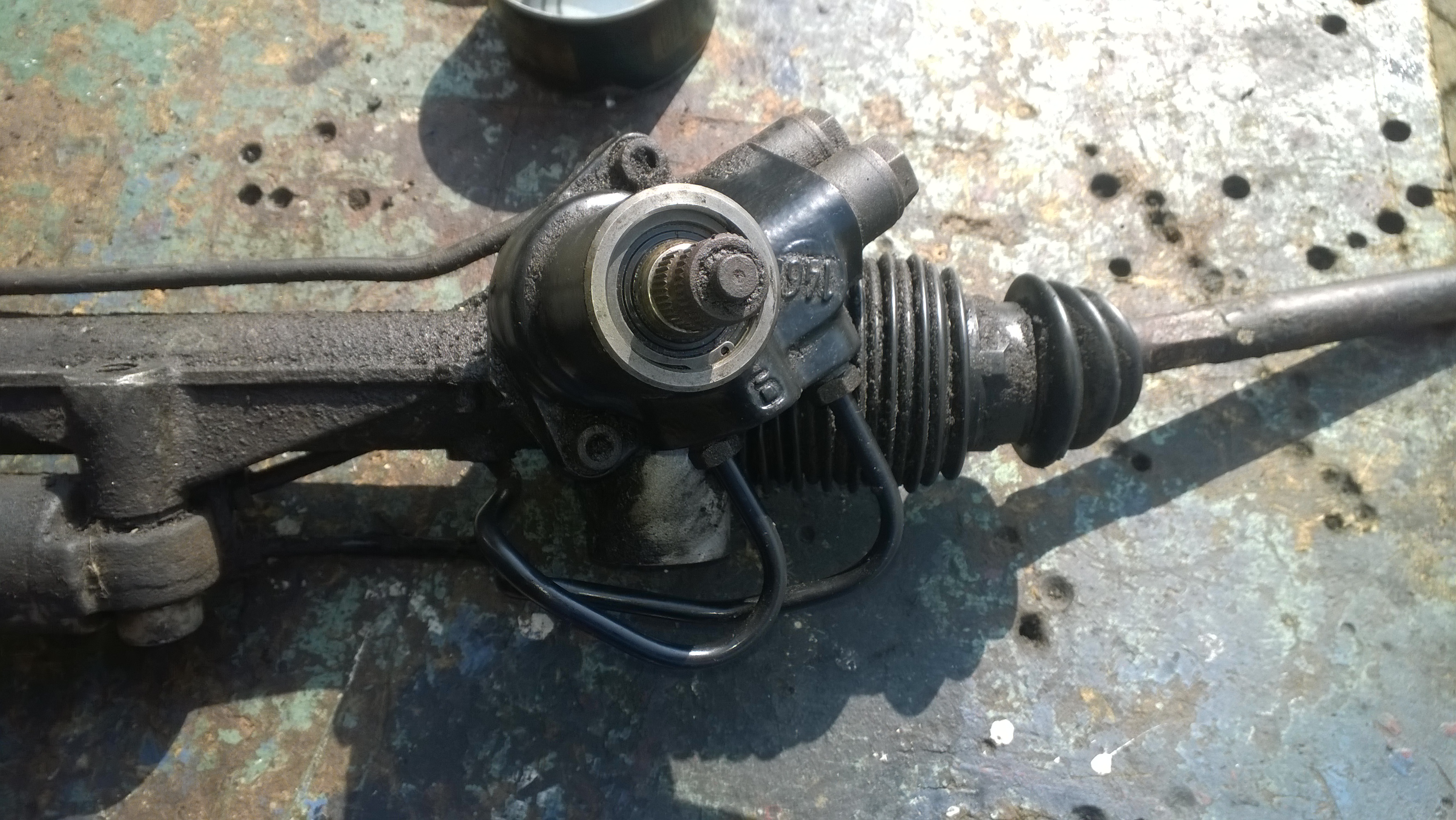 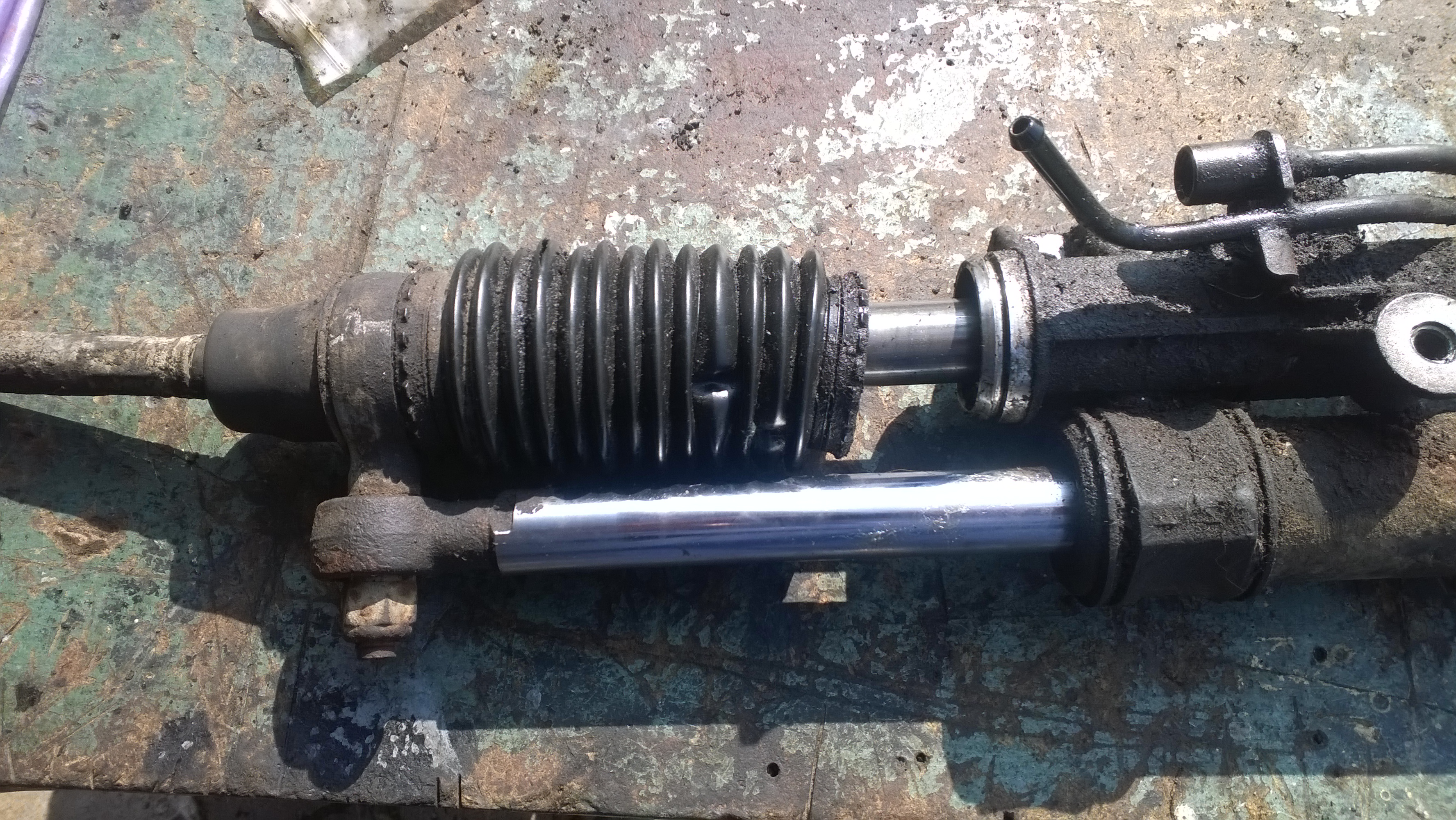 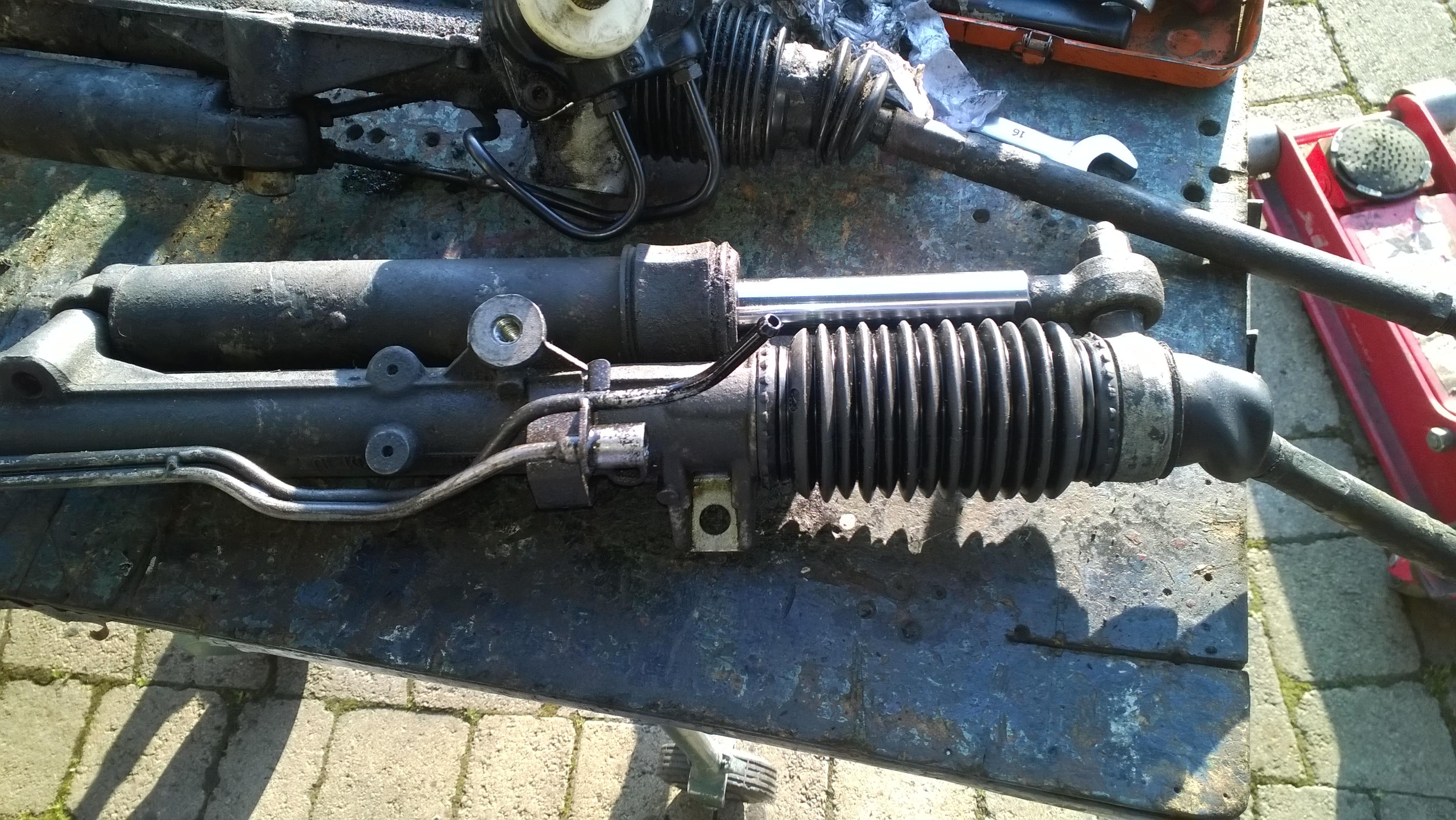 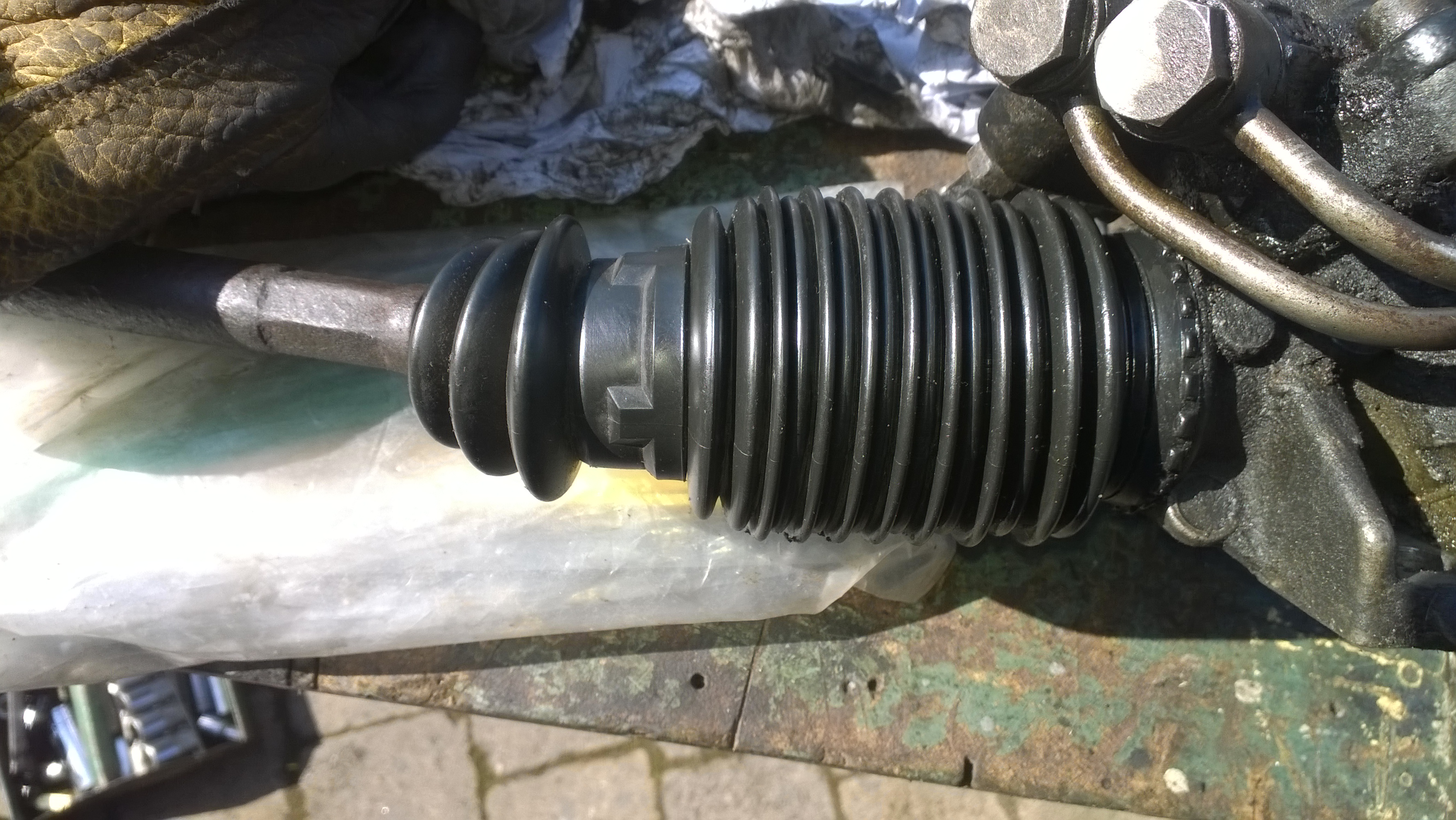 After struggling to get the rack back in and connected to both the hydraulic feed and the steering column on the correct spline, I turned the rack to full lock as a test...and the passenger side gaiter came unclipped on the inboard connection.

out came the rack again and... 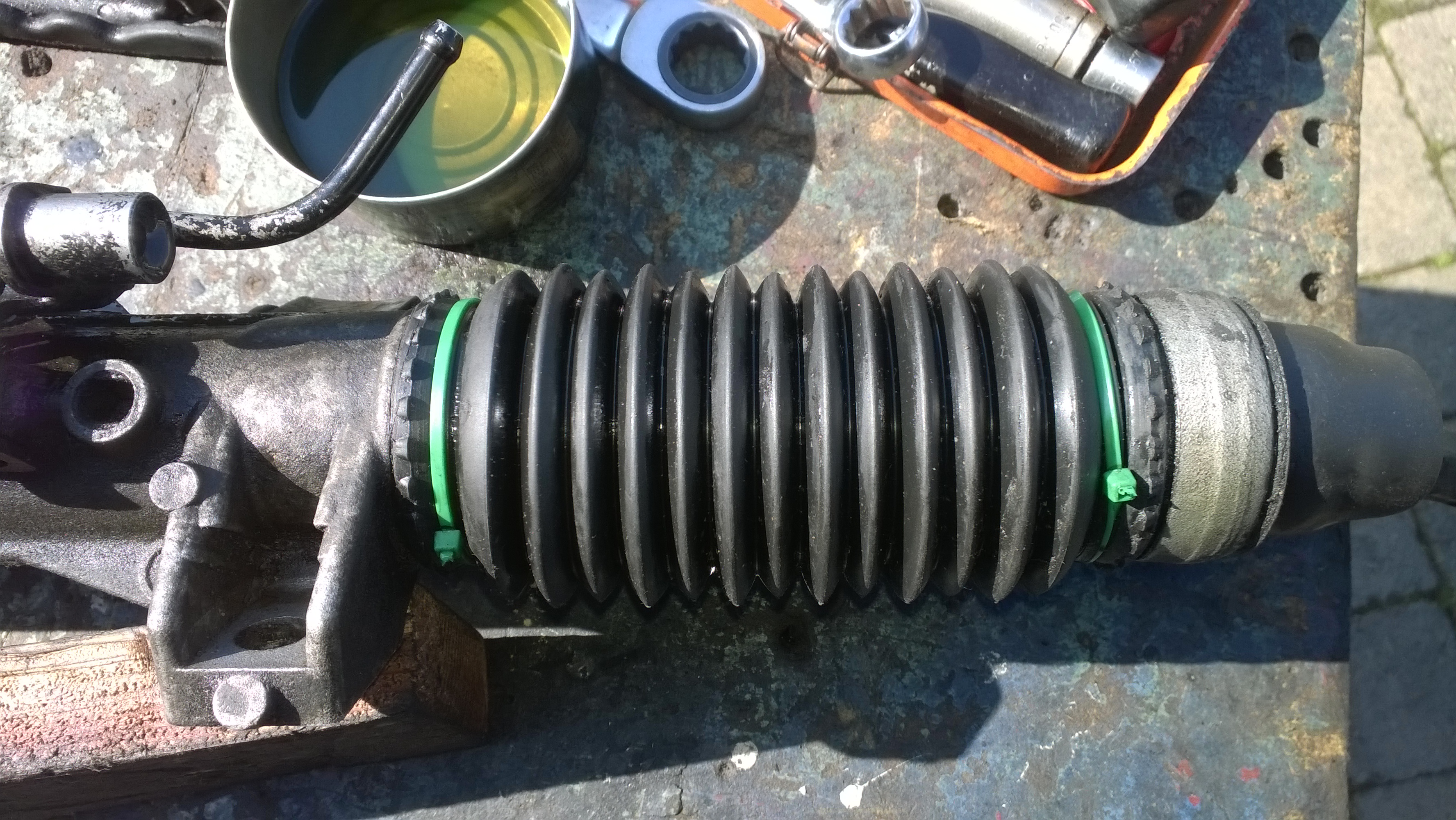 On balance I'm pleased with the Sasic passenger side gaiter. it appears to be made to fit like the genuine Citroen ones, is made of similar material and has the same larger and smaller pleats to allow it to fully compress.
I suspect it needs a bit of time to stretch fully, but I would advise fitting additional ty-wraps as the locking rings don't seem to hold firmly enough.
Bizzarely, for the drivers side, Sasic have changed the material and fitting method to be not the same.

A bit more (lots and lots) more messing about and the rack was back in and connected up centrally. There are 41 splines on the pinion shaft and no keyway. Ensuring the column is located correctly, giving equal turns lock to lock, does take some effort.
After that I set the tracking as not only was this a different rack, the track rod ends had been off. The driver side track rod end always has to come off to fit a new gaiter and the passenger side track rod, so setting the tracking is very likely to be necessary.

Everything got bit of a bath after refitting the rack.

The working space compared to a 2.1td is phenominal. 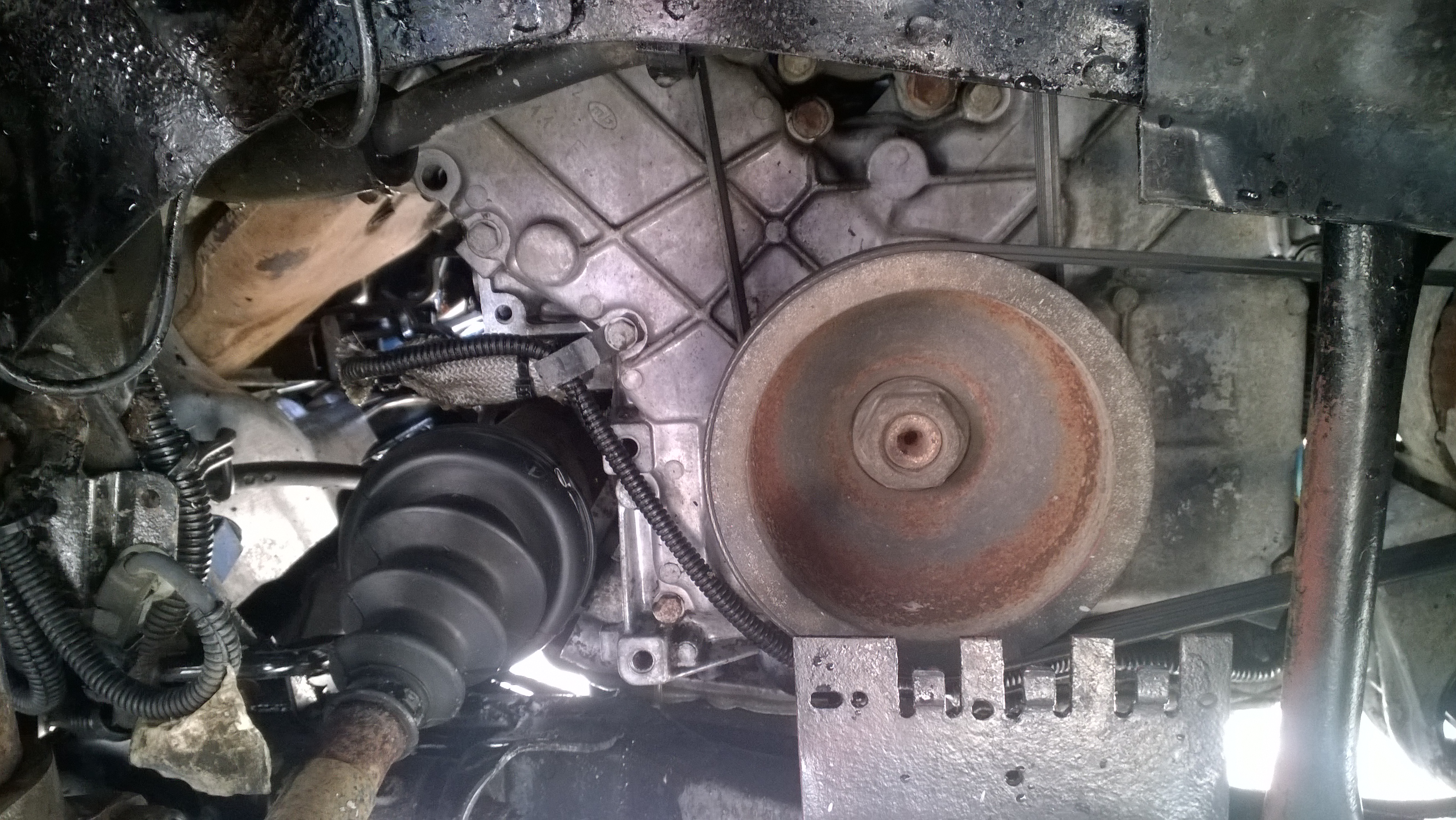 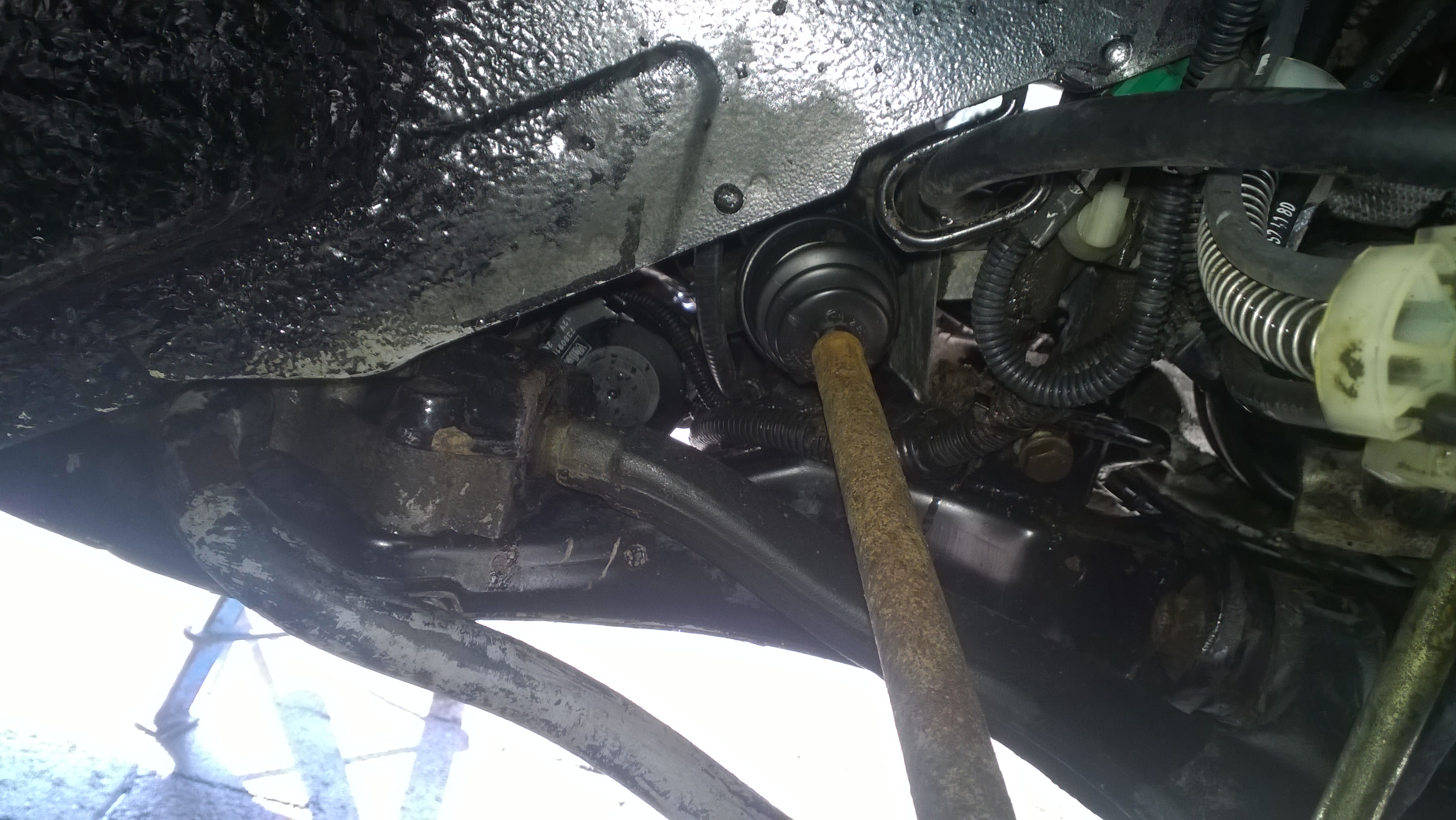 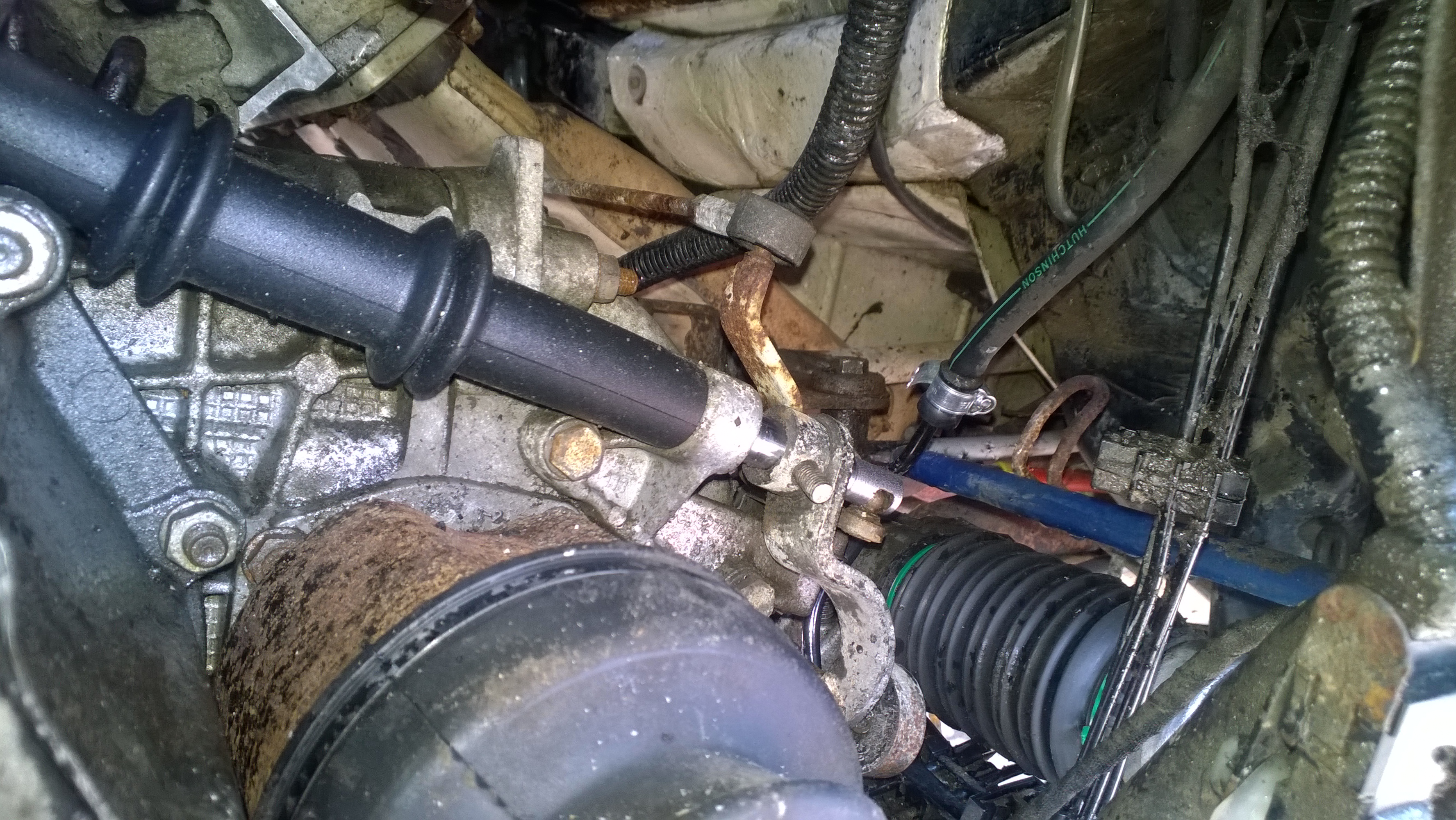 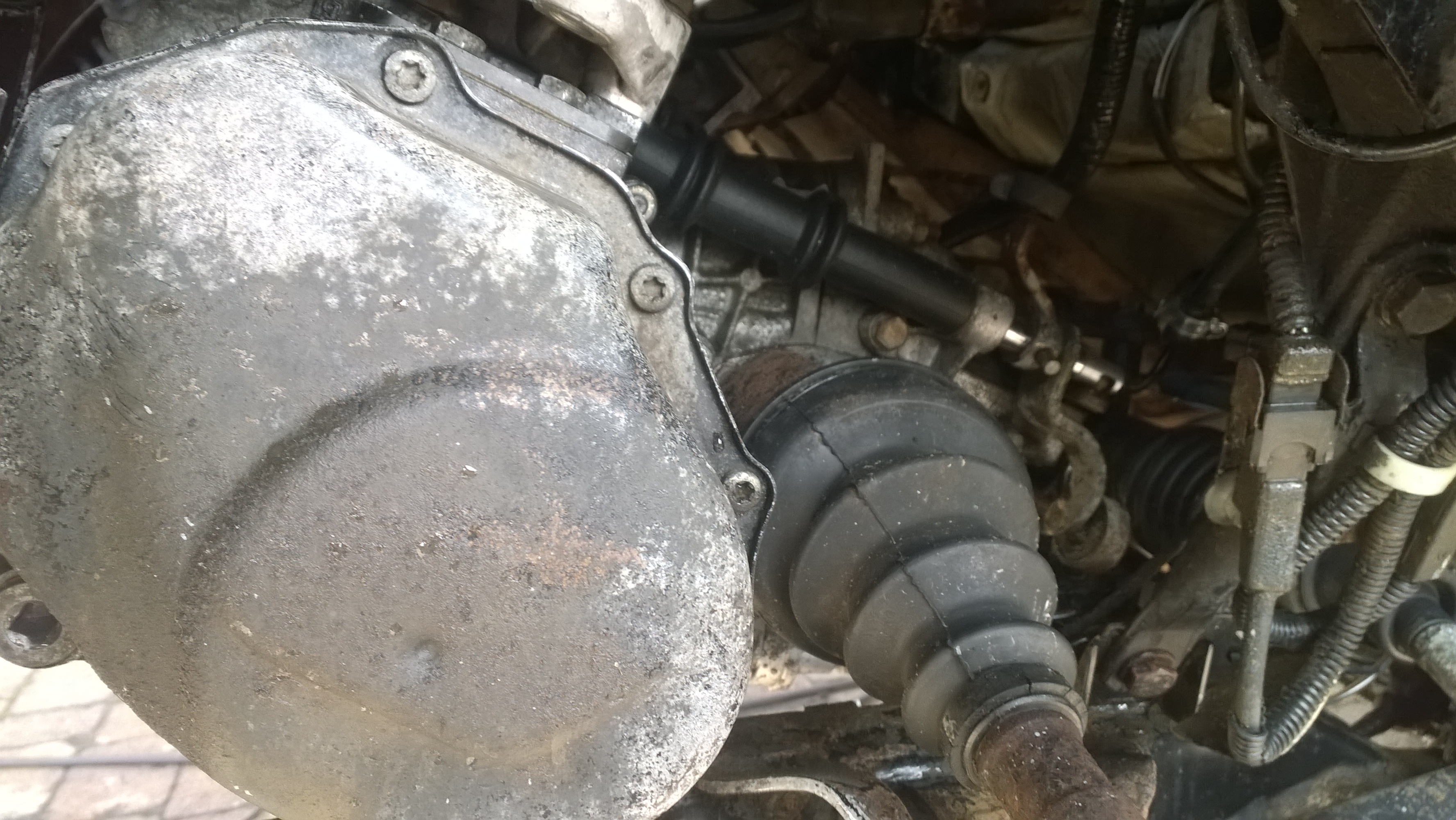 You can see the heat shield round the new (old style) speed sensor.
Also note the steering pinion valve heat shield is back in. This is awkward to fit, but is essential to stop the exhast manifold cooking the pinion valve and rubber doughnut.
You have to push the heat shield up into the cavity before installing the rack...then clip it onto the fittings. 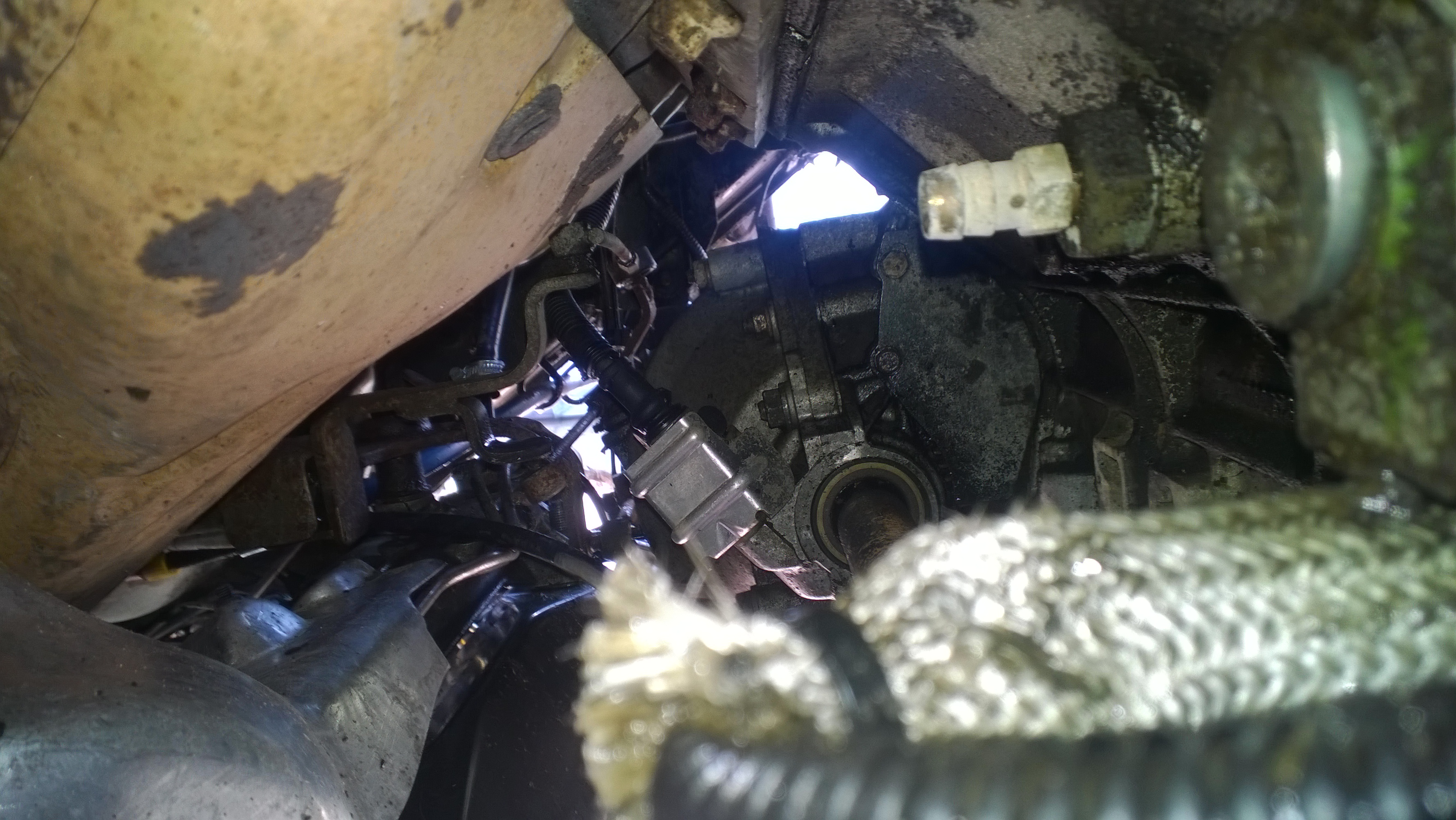 Back to the engine and a check of fuel pressure revealed it to be 36Psi. 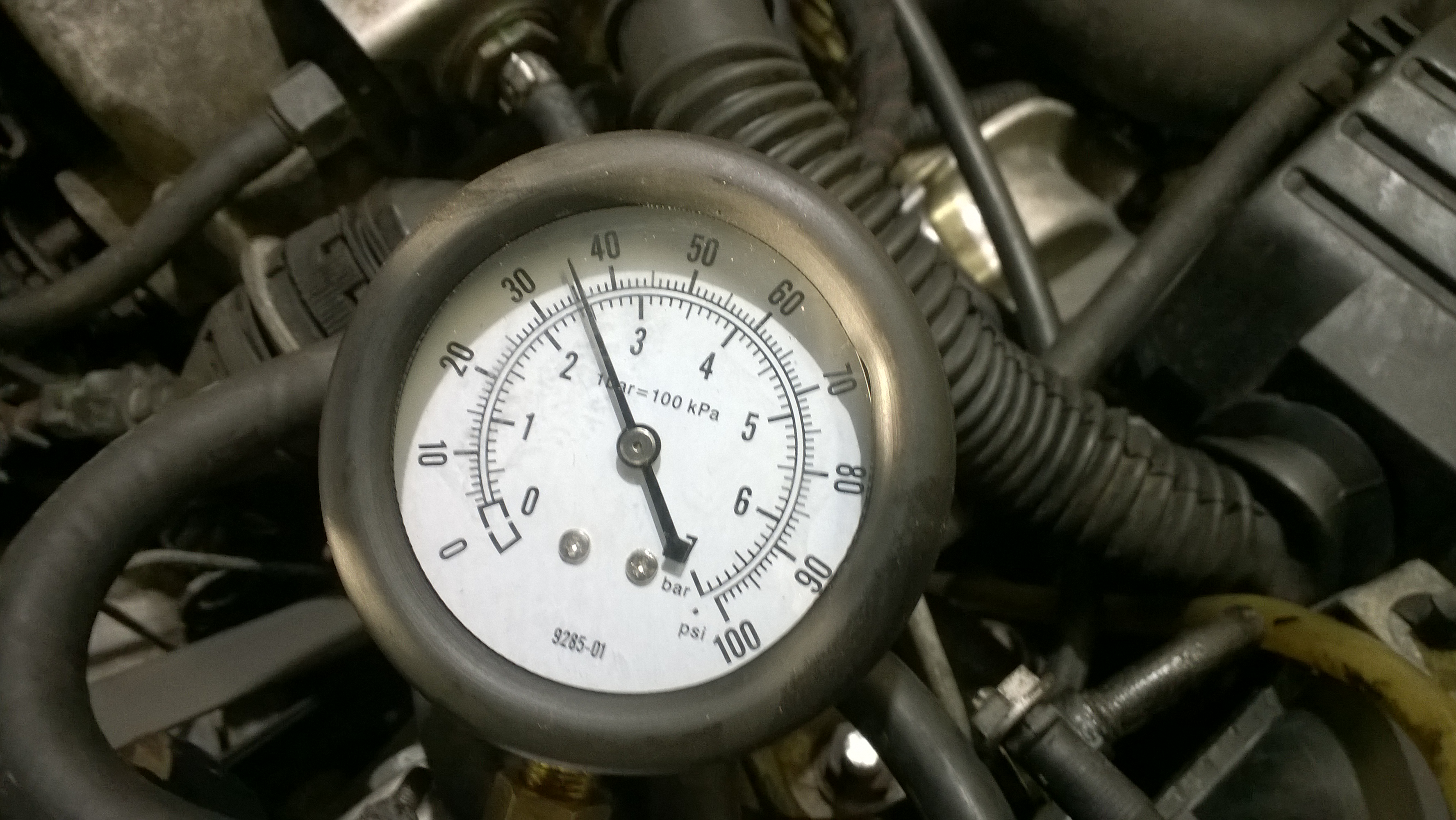 I suspect this is the reason for it running lean and occasional hot start stuttering. 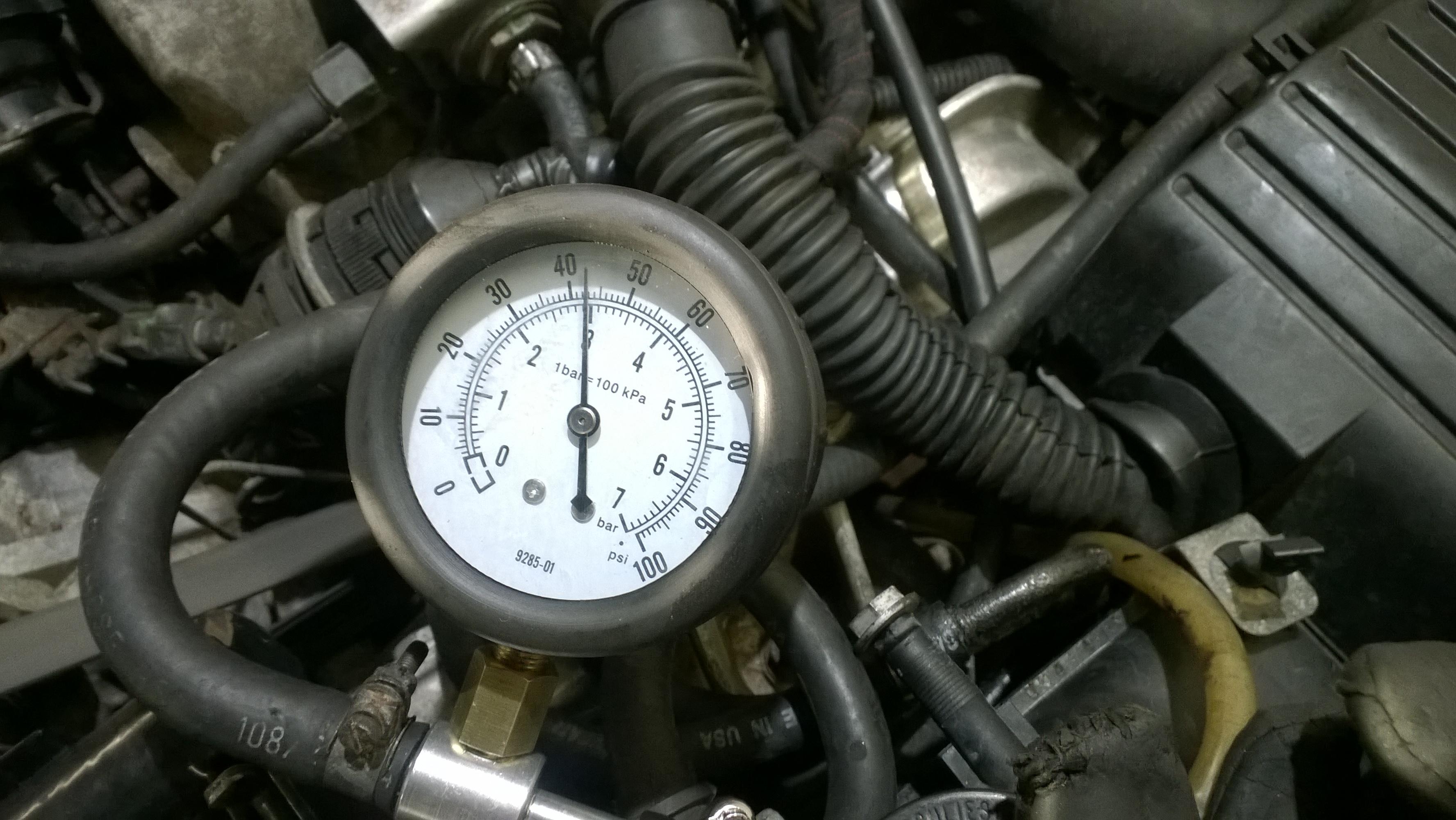 This system should run at 42 psi,/2.89bar when idling, vac connected and 52psi/3.58bar, idling, vacuum disconnected.

I noted the system pressure drops to zero in under 5 seconds at key off.
I performed a pump, dead end, test and saw over 60psi, with the check valve holding 58psi, so am happy they are working OK. 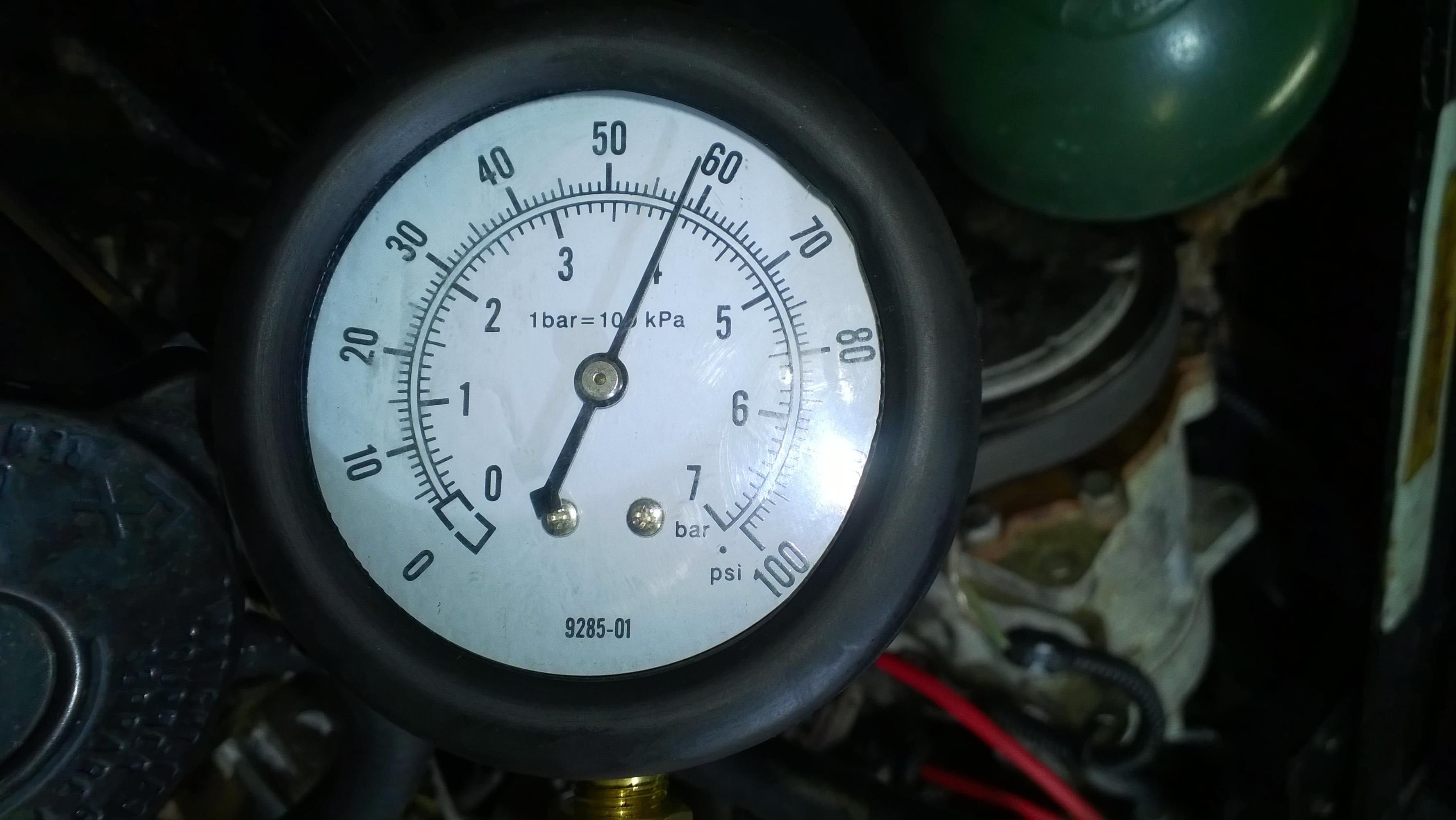 A return flow test revealed the regulator was leaking back even during priming and before engine start and constantly during running, which is the reason for low fuel pressure.

I performed a return, dead end, test and saw full pressure and no leak off, so again am happy the injectors are sealing. After this test the fuel pressure regulator did seal at a static head of 40psi...but after reconnection and running the engine, the original pressure loss returned.

Having take the distributor cap off and seen some oil inside it was time to tackle the camshaft oil seal.

The central bolt holding the rotor arm drive on wouldn't come out, even having removed the A/c drier and battery box for better access. The head of the bolt eventually started suffering, so it was time to think of another way.
It wasn't going to be possible to weld another bolt onto the bolt head as it is recessed into the rotor arm carrier, so out came the drill, which worked very well...obviously destroying the bolt.
Once the shank was drilled through, the bolt gave up it's clamping force and was easly undone. I've cleaned up the threads in the camshaft waiting a new bolt. 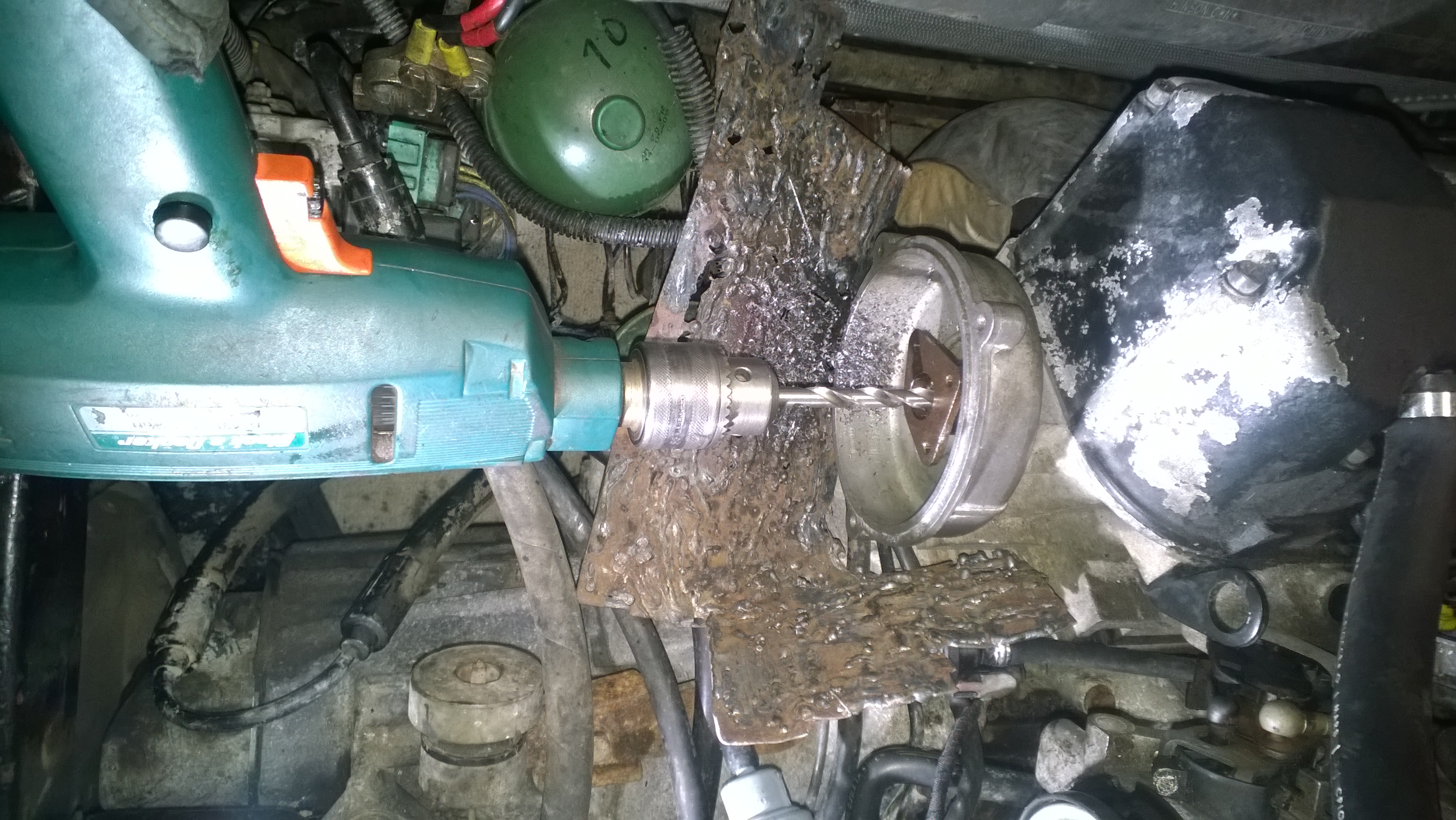 Does anyone have the correct torque setting for this bolt on any PRV6?

Old seal, which was changed for a new one. 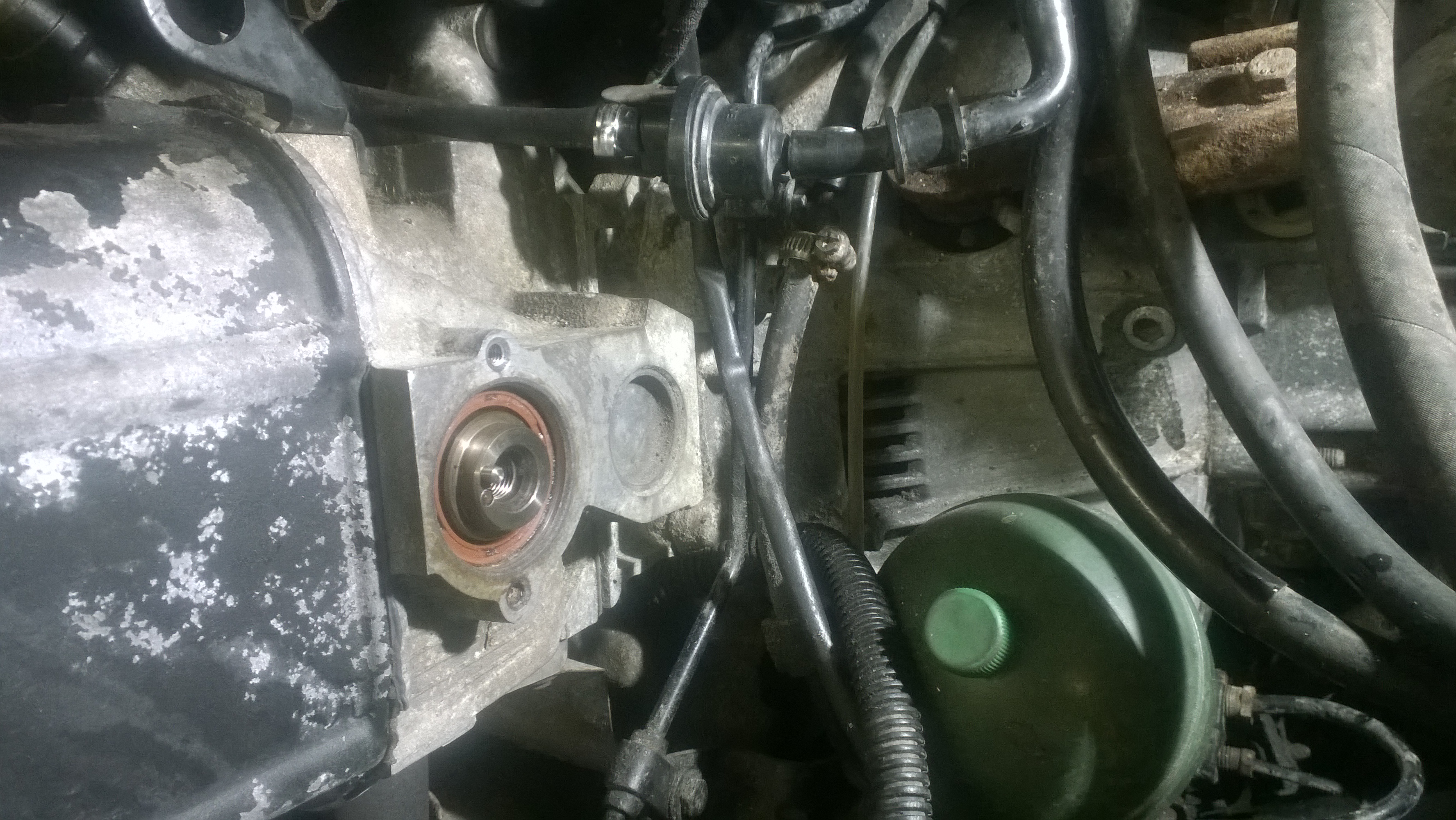 With the battery box, coil and A/c drier out of the way, the gearbox filler plug is easy to get to. These are made of aluminium and are a taper thread into the magnesium-alloy gearbox casing.
Due to the tight taper thread and corrosion, they rarely come out. This one was particularly jammed in...so another drilling session. Drill the centre of the plug out, then tap the sides in to collapse it and remove with pliers. 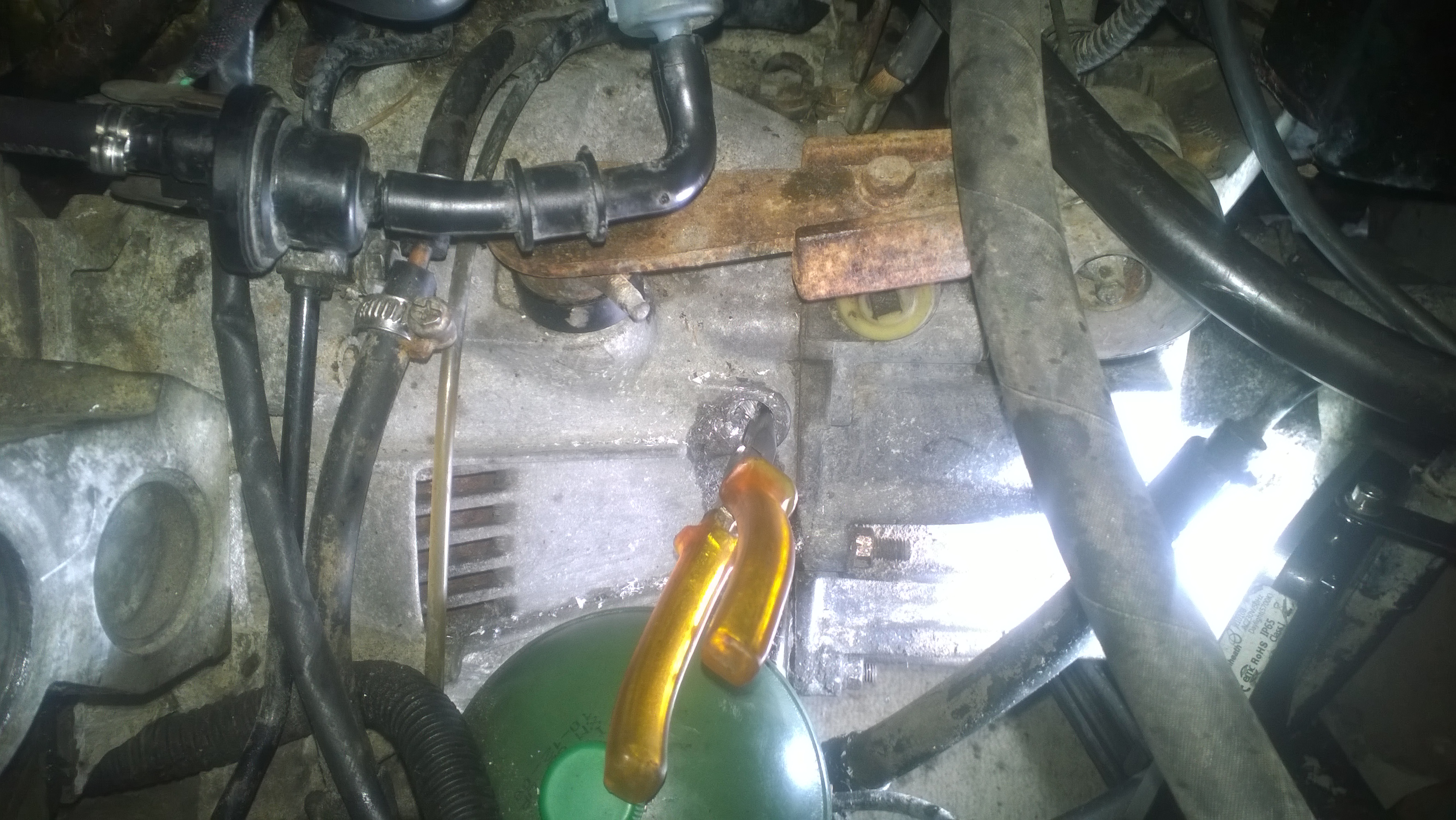