A few bits done today, including refitting the distributor drive. I ordered a bolt on Friday afternoon and it arrived Saturday morning. Fantastic service.

I fabricated a tool, from angle iron, to hold the rotor arm holder and camshaft still, while tightening the retaining bolt.
The rotor arm retainer fits inside the outer casing, so the tool has to both hold it still and allow a gripping/locking tool to be used outside the casing.

The net result is the car is back running and I can remove/refit the rotor arm retainer at will, without having to disturb any gaskets or seals. 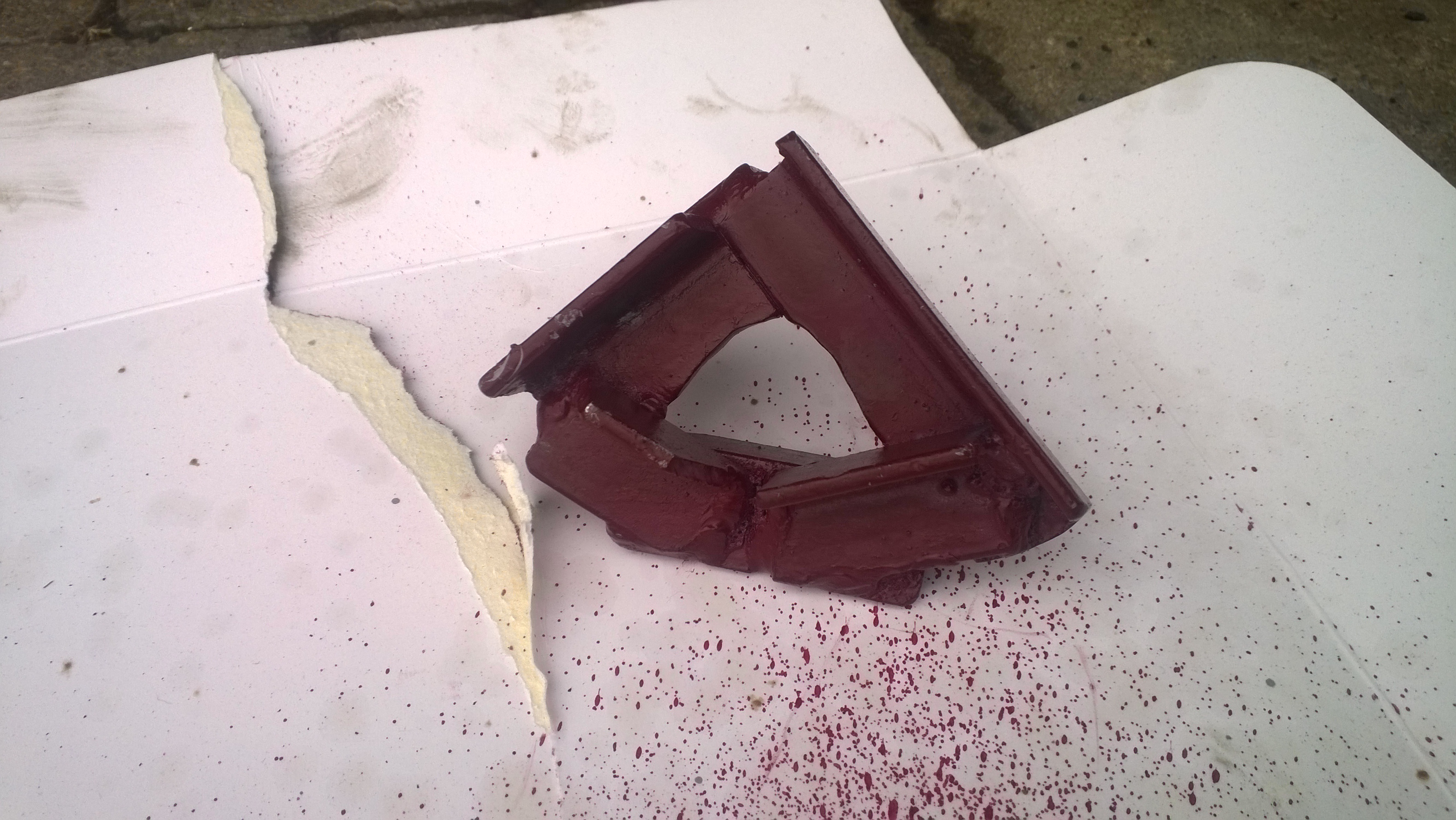 In use. Grip attachment side...Umm, before top-coat paint. I was imaptient and wanted to get the job done. In reality, I did it with the tool unpainetd at all and just took this picture for you. 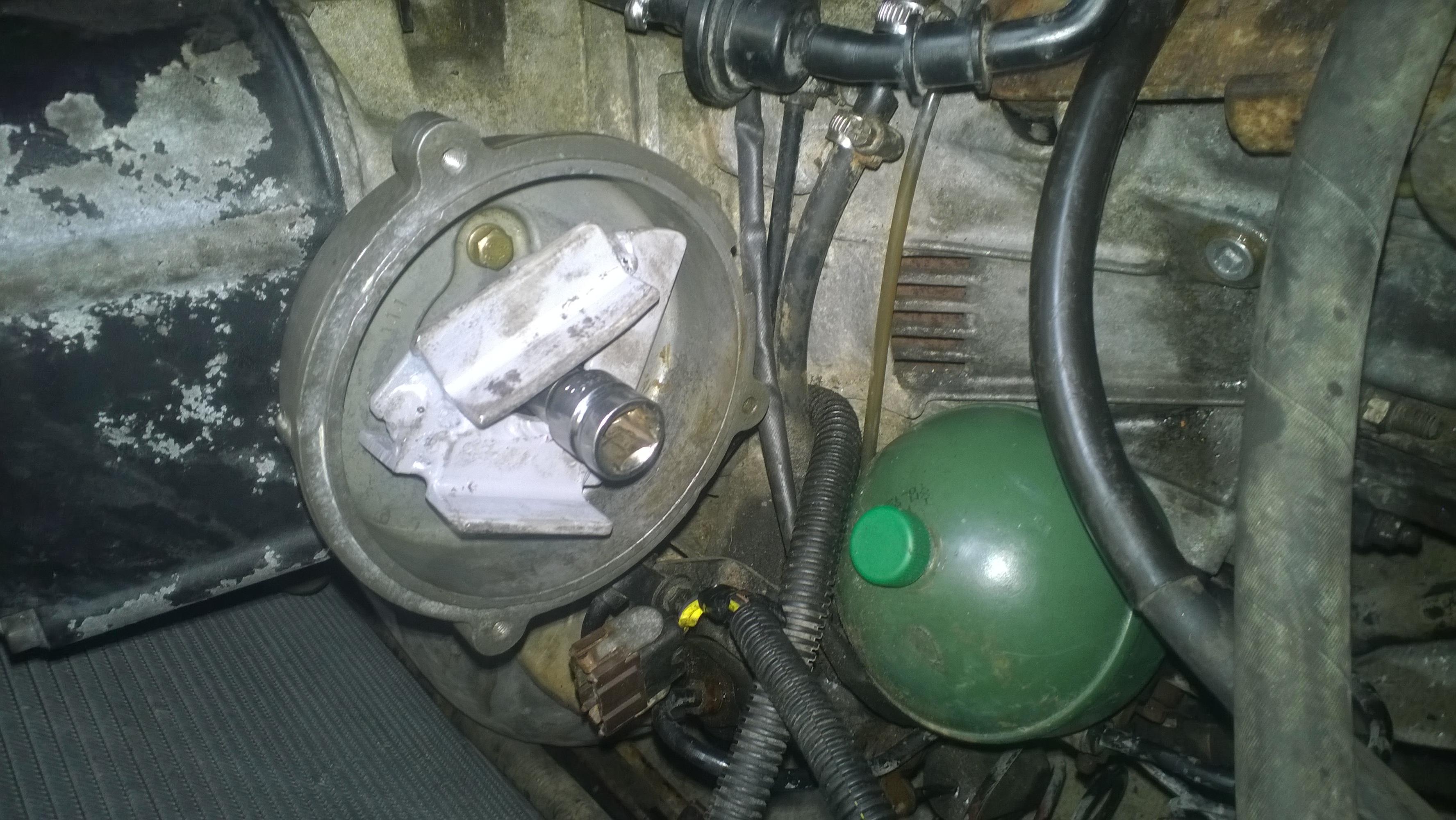 I also fitted the battery box off the mandarin car and all the items that had been removed.

The main issue that has been plaguing this car (apart from the significat rust) is the poor running and ECM light coming on, which has been driving me crackers and caused significant delay in the project.

To date:
Two injectors found to be open circuit, so replaced. All injectors firing. Spray pattern not tested, but general indications indicated they were Ok.

Both lambda sensors replaced due to the ECM light coming on and respective codes.

HT leads were duff, so new ones made up,
The fault appears like a vacuum leak. The engine starts well from cold, but as it warms it starts to stumble then rythmically cycles the revs up and down a little.
Checked for vacuum leaks with guage and smoke test under normal manifold conditions of throttle closed and all pipes left connected.. Any found were rectified. The resultant stalling on blocking the idle bypass hose was better than Citroen specification.
I smoke tested the exhaust as well, all OK.
The vacuum guage still gave a clear indication the engine efficiency was reducing as it cycled the idle vacuum lower in steps, then suddenly back to the original reading.

I re-checked the compressions and cylinder balance. 150 psi across all 6. Sounds low, but it's what these engines produce. (or my guage is faulty)
Fuel pressure was at the specification 3 Bar max, but instantly depleted on key off. The spec is 3 Bar at priming or vacuum disconnected, this will give about 2.48 bar at idle with the vacuum pipe connected. (Dean, be aware, your's should be the same. I originally used your readings as spec. Your ECU will be trying to reduce injector pulse width to counteract the additional pressure)
New fuel pressure regulator fitted.
New sparkplugs, which I then gapped correctly.

It transpired that two of the four Lambda sensors I have received were faulty, one new stock from a supplier, one from a forum member. 1st one the heater is open circuit, 2nd one the Zirconium element gives no output when heated with a blowlamp.
New, known good/tested lambda sensors on the car.

I tried scoping the lambda sensors, but saw odd readings. Couple this with my digital scope being faulty on the A channel, which is the trigger, I gave up on scoping and reverted to using a DMM, which does work. You can see the output dancing around between 0v and 1vdc...or you should...

What was happening was the sensor voltage would gradually drop to virtually no output on one bank and sit high on the other and the engine would start labouring....then for no apparent reason the given sensor would start to report and the other one drop to 0v.
I could test the sensor output by prodding the throttle potentiometer. This would send both lambda sensor outputs high as the extra fuel was injected, then the same cycling would start again as the sensors took over the mixture control.

With so much back and front probing of the ECU 55 pin connector the terminals for the lambda sensors were damaged, so I fitted new terminals. (timer terminals).
This new good connection seemed to make the situatuion worse.
The reference for codes and diagnostic information has been the genuine Citroen technical book for the V6-24v dated 30th April 1991.

As the fault appeared like a vacuum leak I went back and smoke tested the intake again, this time disconnecting and plugging the breather hose and sealing the trottle bodies with rubber sheet clamped over them.
Constant pressure of 4psi revealed two minor air leaks, the idle bypass rubber grommet was leaking slightly and the thottle spindles weeping. Neither would cause an issue, but I sealed the idle bypass grommet.

The car ran poorly, surging and holding back, until throwing the ECM codes and light on when left idling to fully hot, at which point it smoothed out noticeably.
I noticed it ran well in open loop, i.e. when cold, or accelerating hard, so decided to disconenct the lambda sensors to force open loop running to see how the engine ran without lambda control. This will make the ECU adopt basic settings and run a little rich as a safeguard.
General running was good, smooth with no misfiring and steady idle and vacuum reading, no jerking or holding back.

I connected each lambda sensor in turn and the fault returned.

Thinking back to the lambda outputs made me suspicious that the lambda control was working in reverse. As bank A reported a low output (lean mixture), bank B would report a high output (rich mixture), with the ECU attempting to adjust fuel trim to compensate, before reverting back to the default and starting again.
Once the cycle started again bank B would go lean and Bank A sensor would start reporting again. This could be either bank randomly, mainly bank A went lean and the code was always front bank mixture control.

The sensors were connected in reverse...the technical document says front goes to pin-23 of the ECU, rear to pin-4.
It also states the lambda output connectors are red and the heaters yellow. The opposite is correct.
This was causing bank A sensor to report on bank B and vice-versa. As the sensor reported high the mixture was leaned off. The opposite bank then started to report low and richen the other bank mixture, so it reported higher.
The cycle just got worse until the ECU ran out of adjustment, then it would start again, hence the cycling.

I don't believe the ECU connections were changed between 1991 and 1992. Be aware!

The circuit diagram I have, which isn't quite the right one for my car as it is missing the EVAP circuit, has the ECU pinouts correct, but only denotes the different sensors by a number, so isn't fully clear.
I have now colour coded the loom connectors, as they are next to each other and identical.

White Exec wrote: ↑
Fri Apr 19, 2019 10:01 pm
Is this something that could be shown correctly on Gabor's circuit diagram, if an actual Cit mistake?

I can't see Gabor's diagram as it has question marks over it, but it looks like the same diagram as the Fenix-3.

I can see how Citroen made their mistake.

The ZPJ, Fenix-3 combination uses continuous injection, so only needs to know the overall mixture strength as the same is applied to all cylinders.
The ZPJ4, Fenix-4 uses sequential injection, with each cylinder being fed an accurate dose of fuel by varying the injector ON time.

I am aware that another member had problems obtaining the correct lambda sensors and wiring them up correctly. he believed the Red and Yellow connectors, (heater +12v and sensor output) were reversed, as the Citroen tech. Book shows.
They are not, the conenctions are correct, Red to Red, Yellow to Yellow.
I also believe my own car has been worked on previously for this issue. The TPS and both knock sensor connectors have been changed to power timer connectors instead of the original EV1 type.
I suspect it was thought the ignition timing was being retarded, hence the vacuum reading reducing in steps, then cycling back to a more normal reading.
92 2.1SED M.RP5740 ECZ Sable Phenicien
92 3.0 V6-24.Rp 5713 EXY Black
92 2.1SD M.RP 5685 ENT Blue Sideral
Prev
90 2.1SD M.RP 5049 EJV Mandarin
92 2.1SD A.RP 5698 EJV Mandarin
94 2.1SD A.RP 6218 ERT Triton Green
91 2.0SI M.RP 5187 EWT White
Top

Rgarding your ??. As said the Citoren technical manual is clear that the front sensor feeds to Pin-23 and the rear one to Pin-4. On the circuit diagrams the sensors are denoted as 899 and 900 only, no legend is given.

Do you have a complete set of circuit diagrams and associated legend to refer to? If so, maybe sharing them as members ask for assistance would be useful.
I first asked for a circuit diagram in 2017.

iirc, Gabor put question marks over his Fenix-4 diagram as there were discrepancies between his diagram and the wiring in Citroen diagrams and on the car, with reference to how the injectors were powered.
I've not seen a later diagram from Gabor. the one I downloaded yesterday still has the question marks. Is there an updated version avaialble, if so, is it accessible to all?

I (obviously incorrectly) thought I could rely on Citroen Technical information for the v6-24v engine and control.
I know another member had similar issues regarding the colour of Lambda sensor connectors being interposed on his 24v. I suspect his information had also come from the Citroen Technical document, via the dealer chain. 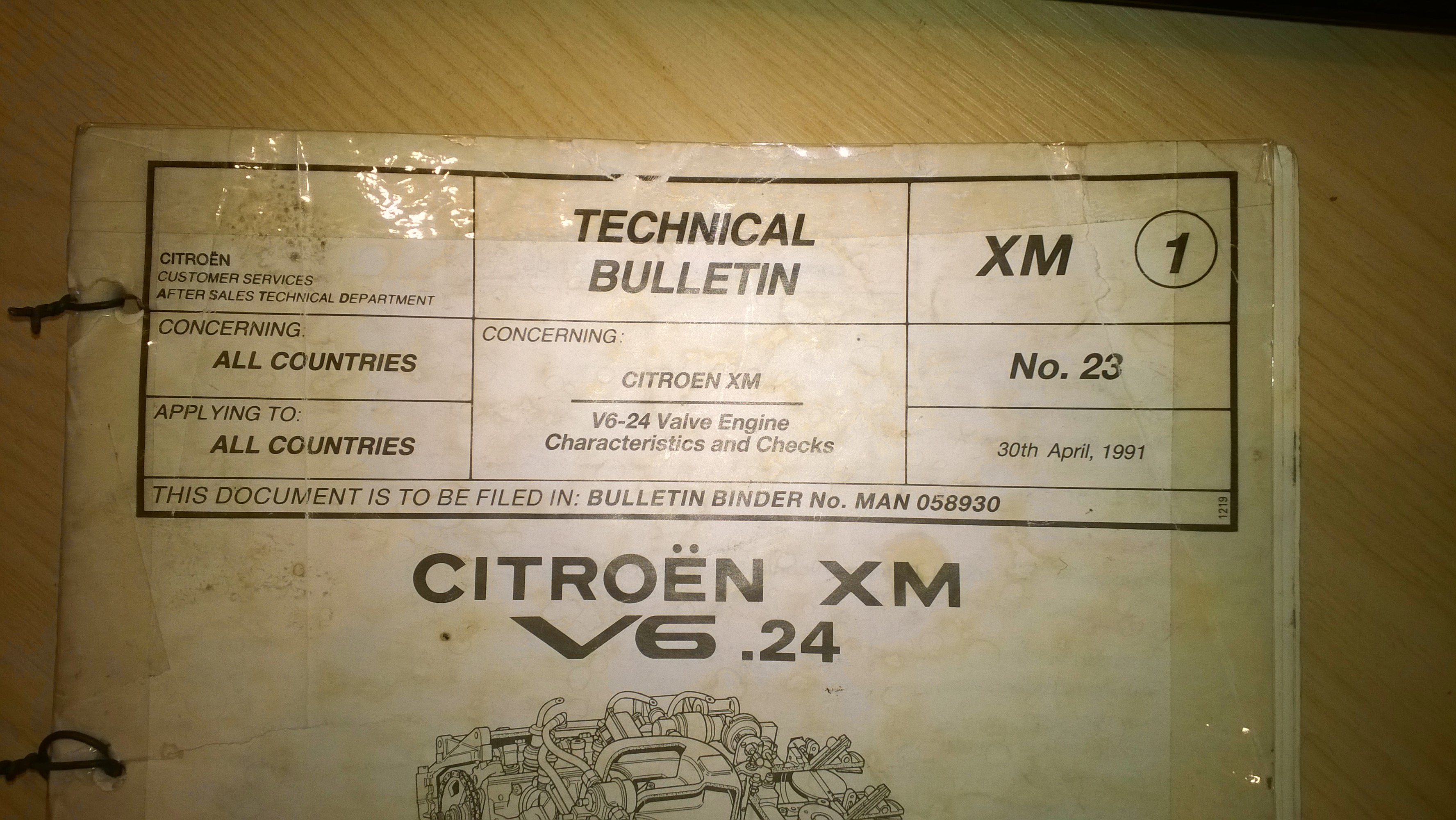 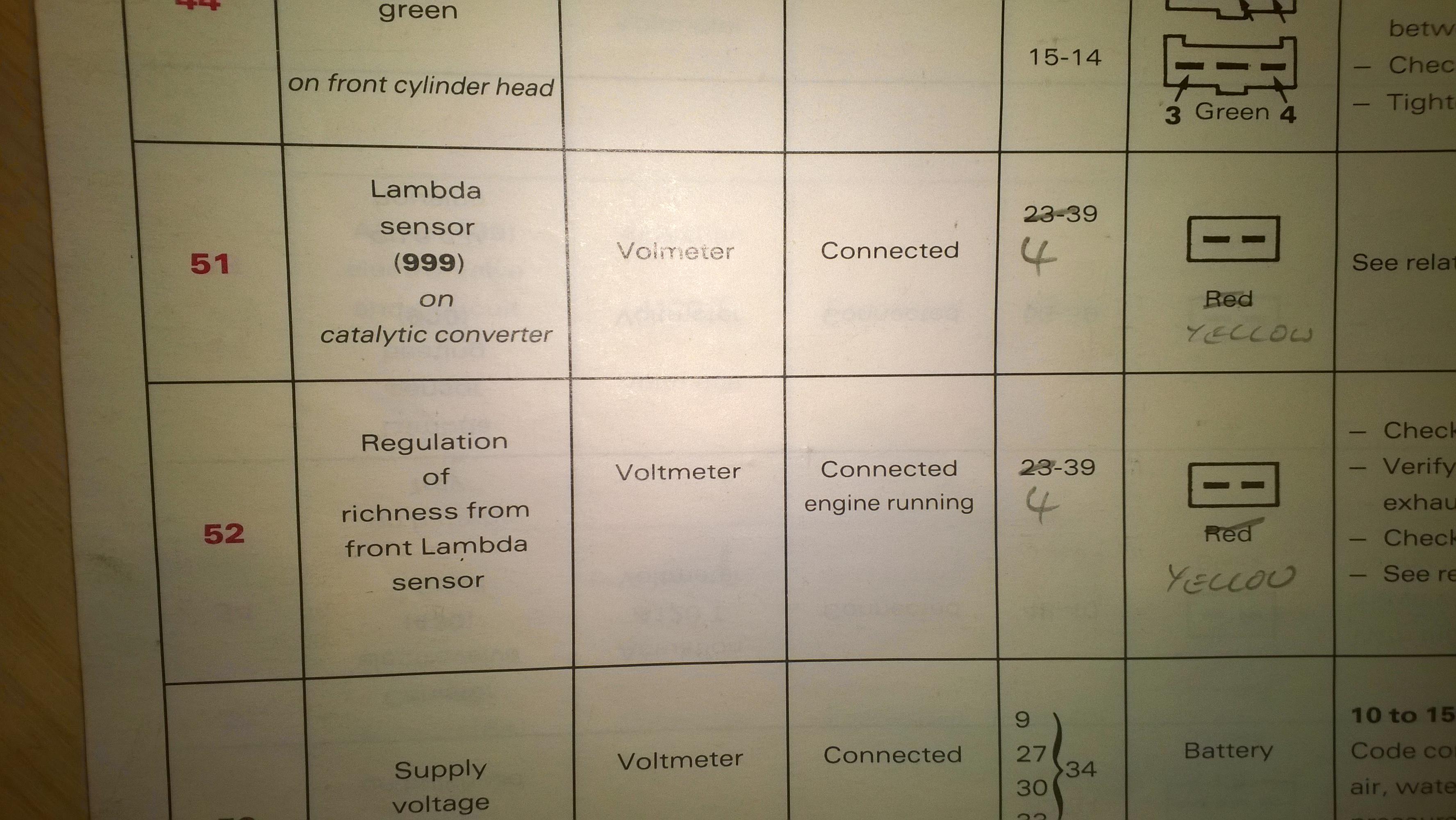