Progress on the V6 has been non existant for the last 6 weeks or so, but prior to that there was some.

New radiator and spheres. The two front mounted spheres must be fun to change with the radiator in. 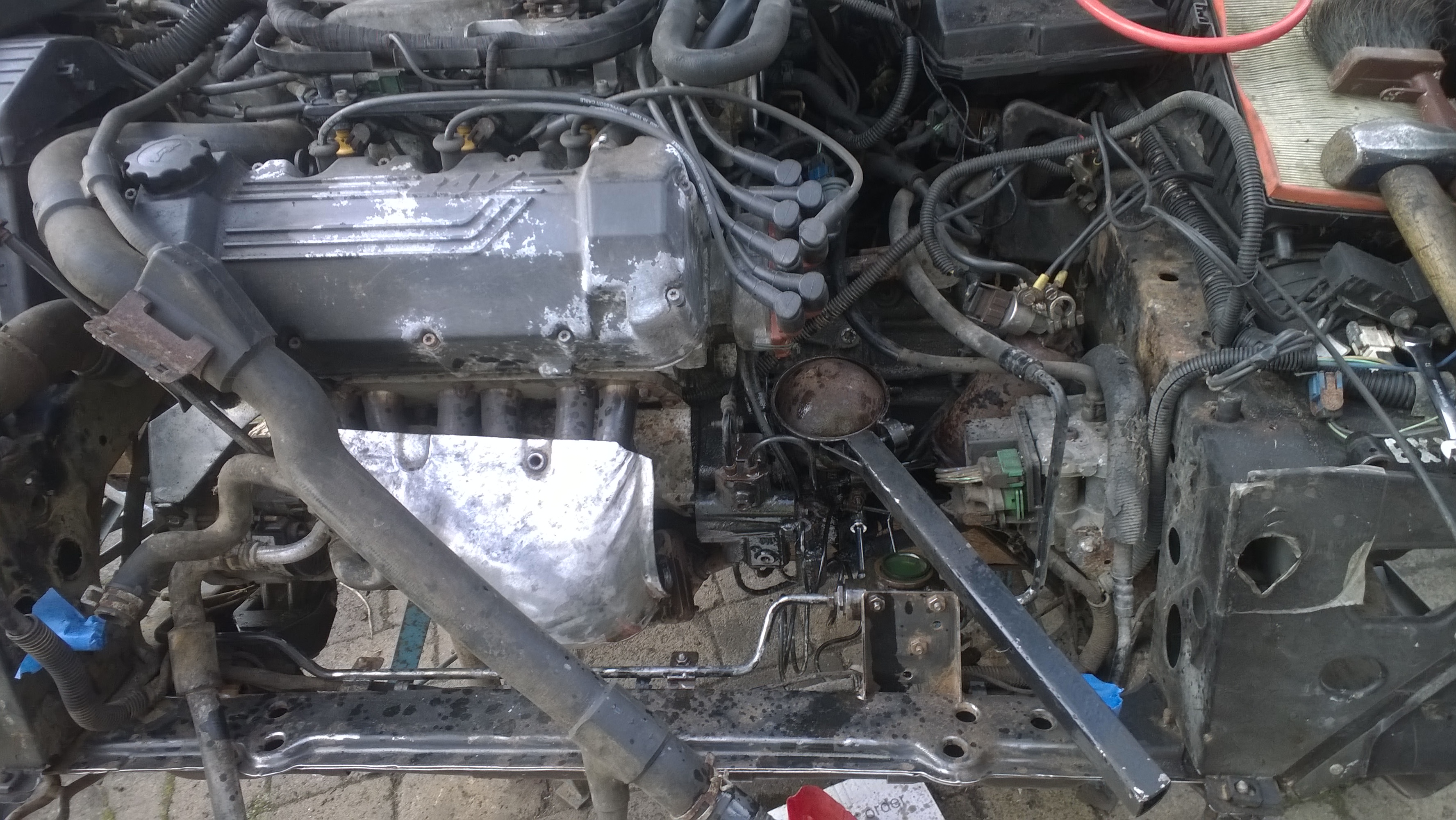 The very, very rusty looking front strut tops removed, de-rusted, inspected and painted. The pipe banjo bolts were so rusted on the pipes started twisting, so a blast with the blowlamp was the only way to undo them. 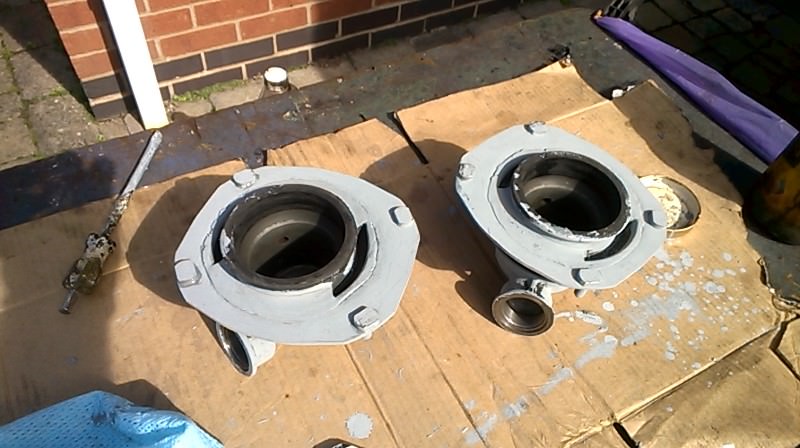 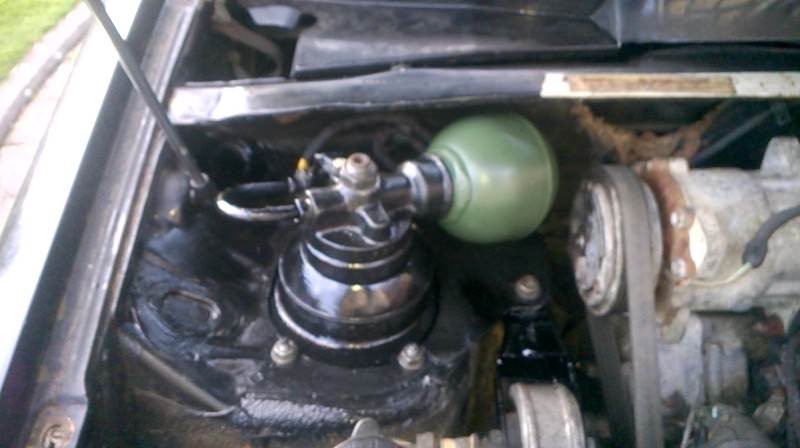 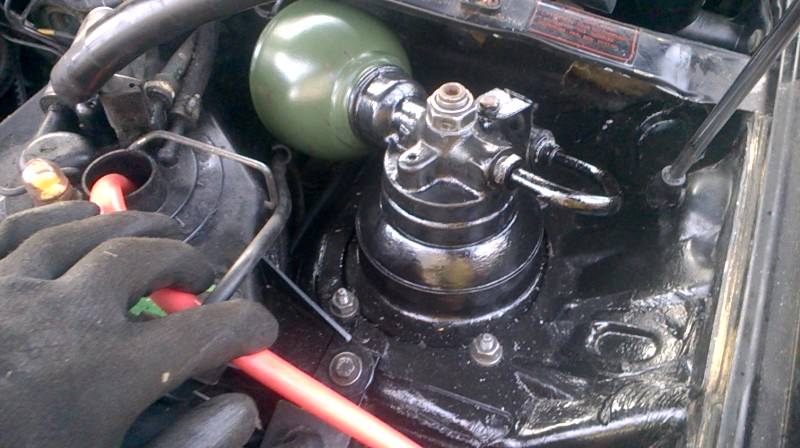 The Exhaust patched up. I was having loads of trouble with my MIG welder, so resorted to Arc welding the stainless patches... I have since fixed the MIG welder, which had a kinked torch liner, the gas tube had come off inside the torch lead, the wire feeder was slipping and gas was escaping from the regulator...
Rather than upgrade to a Euro-torch, I've now bought another MIG welder as well, so have now gone from no working MIG welder to two...along with two arc welders as well. Just need a gas kit for the DC-MMA and TIG welding should be on the cards. 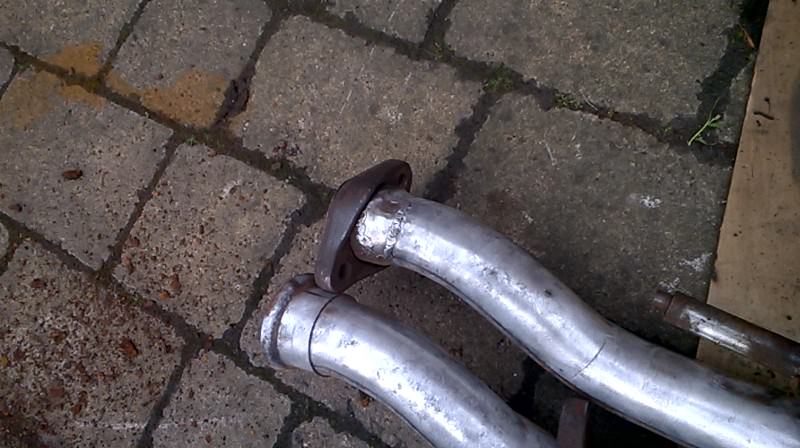 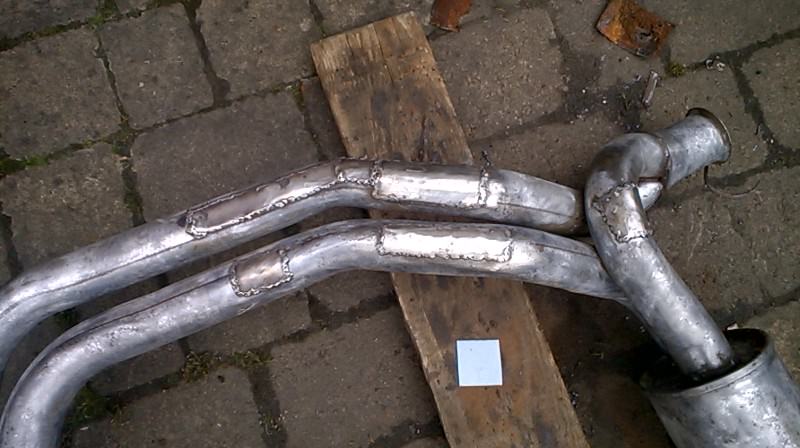 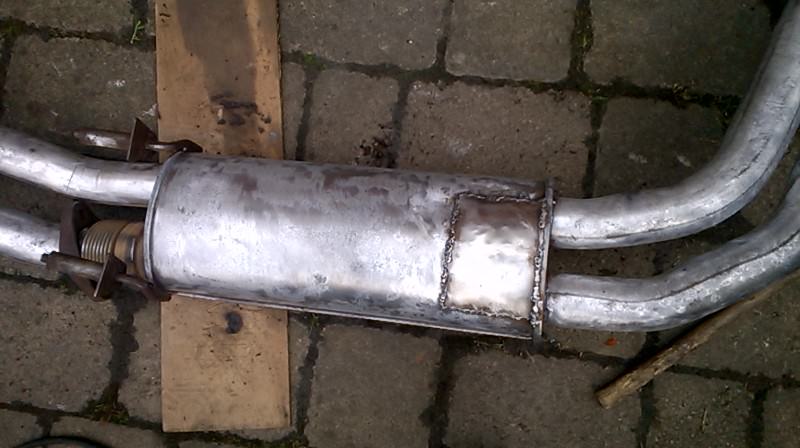 Due to the welder playing up, I put off looking at the towbar mountings.

I wasn't sure whether the rear chassis rails were corroded, or just crushed. Who makes a towbar to mount like this? 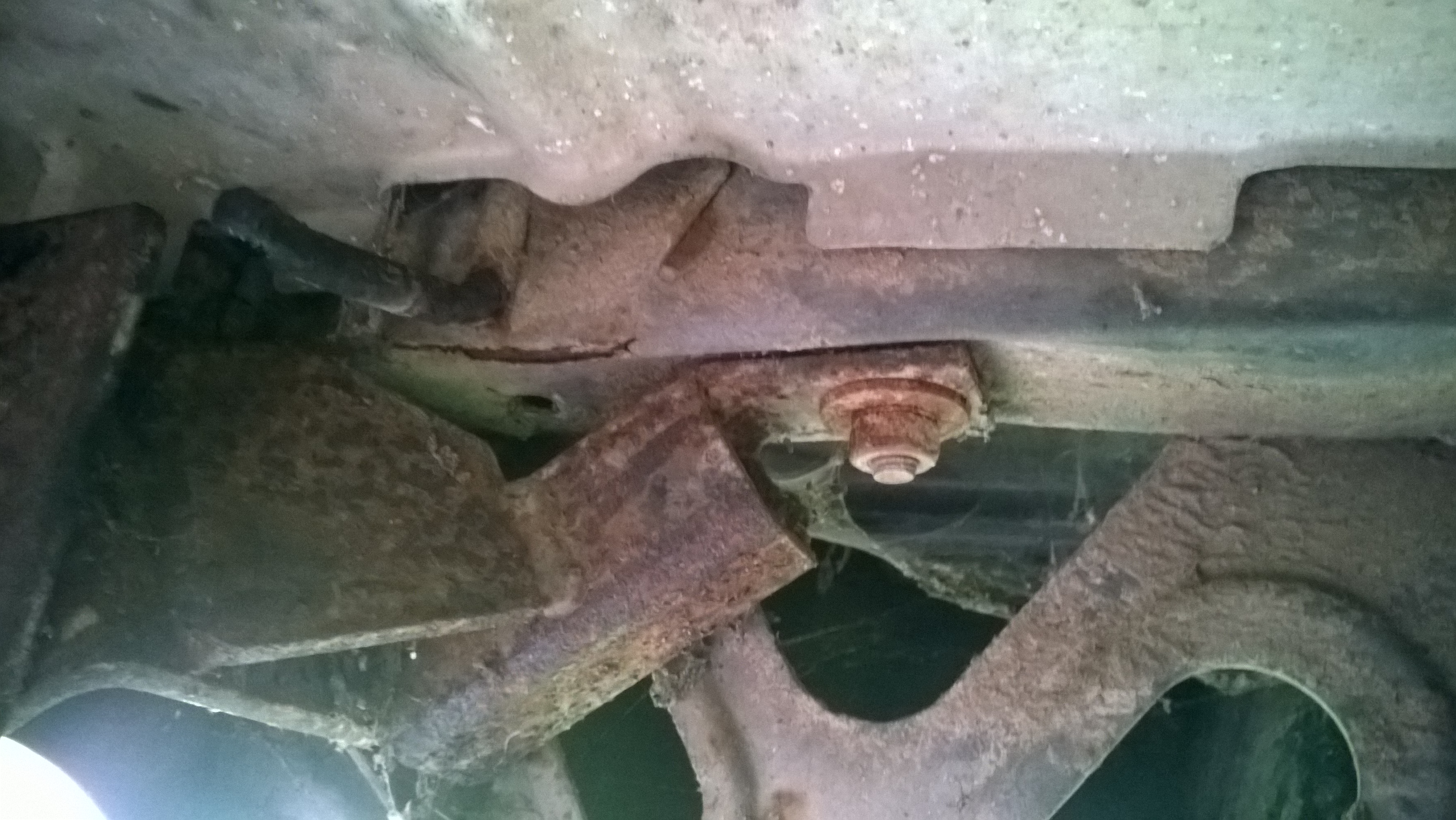 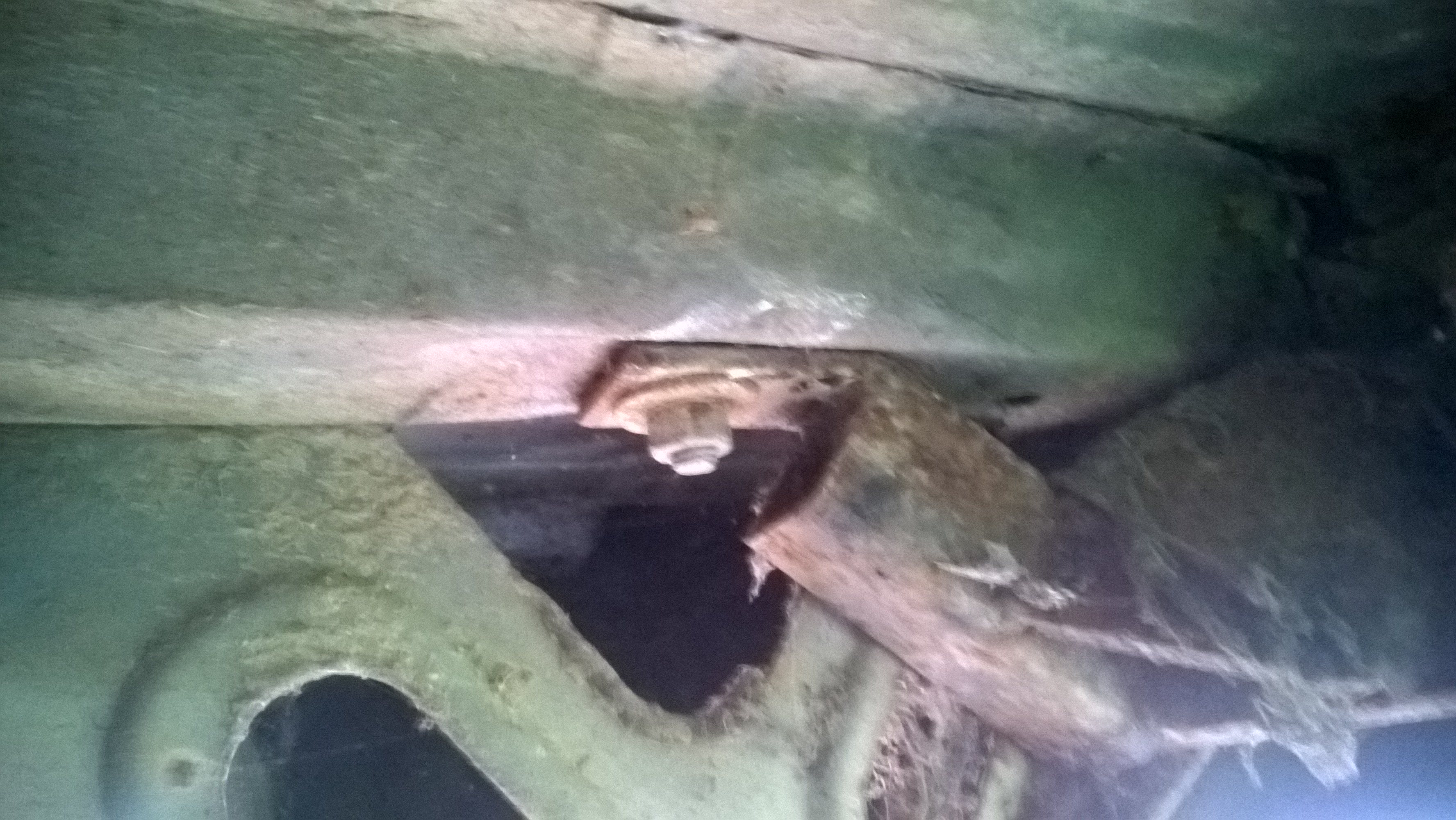 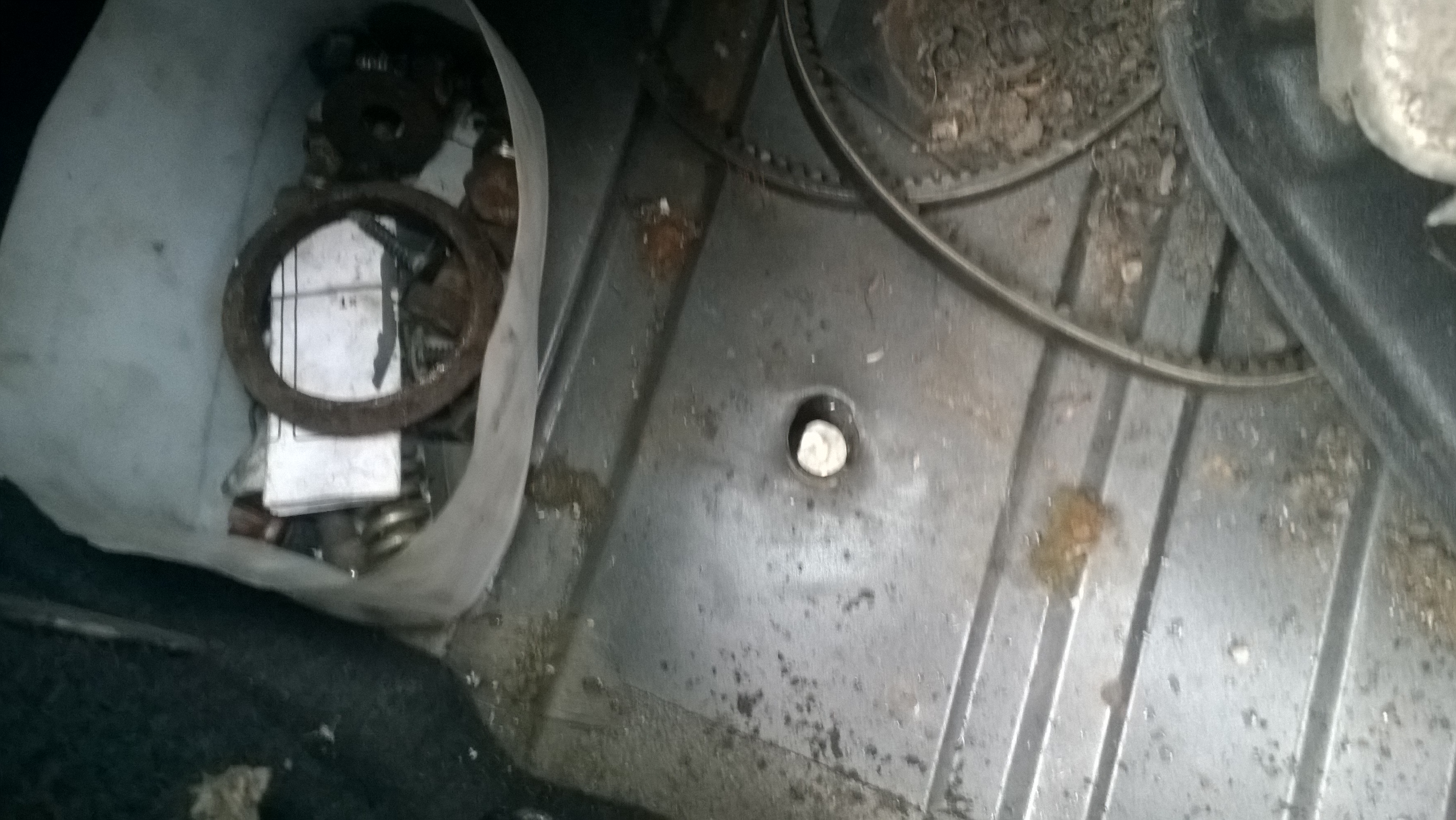 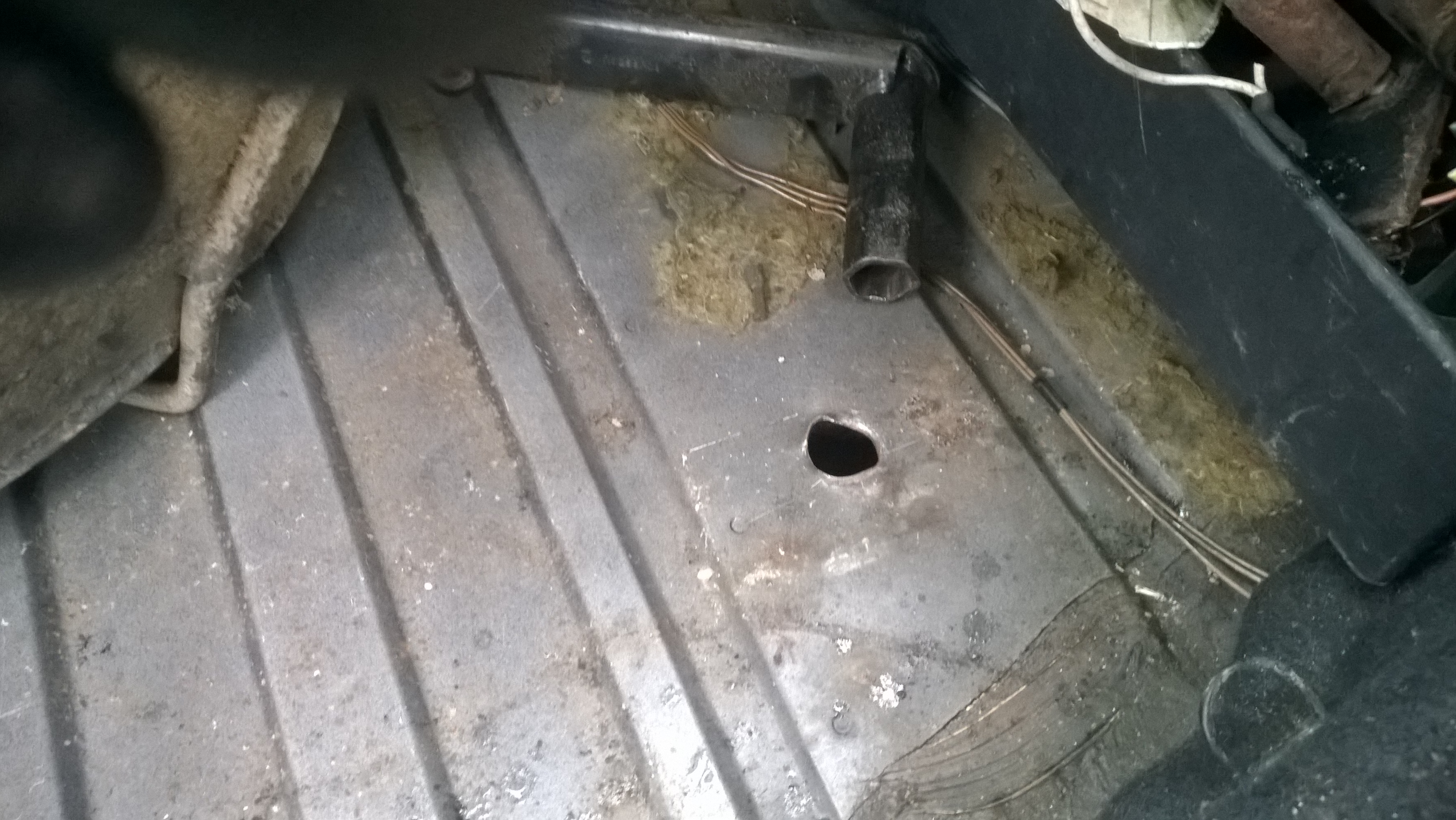 Sure is. The towbar was able to rock up and down once the chassis rail was deformed, as the bolts just passed up into the boot with clamping plates on the top. There were spacer tubes installed, but as the holes were so large they just went up with the bolts.
My guess is that the bolt holes are meant to be smaller on the top side (boot floor) so the spacer tubes can't pass through, then the boot floor is effectively performing the bracing function.

Today, a scrap metal collector called by to see if the V6-24 was going for scrap...!!

It's now safely esconed in the garage...the poor Mandarin car is now outside under a car cover. The strip down has started.

Impresively, both cars started after only 1 second of cranking...the TD with two glowplugs disconnected.

Leave it in a heated garage for the winter and if the self-healing continues it will probably come out like a factory fresh car in the spring.....maybe.

Well, it's in the garage...which isn't heated and as it's forcast to be -7c tonight i thought...Hmm...maybe I'd better put some antifreeze in the engine.

The new valeo radiator came with the drain plug sealed and as I've seen others leak at the drain plug I decided to leave it like that. To drain the system I've had to remove the front of the car and the radiator, drain it and then run the engine to blow water out of the upper hose.
4 litres of Prestones' finest 5 year antifreeze and a couple of extra litres of water and all is back in action and freeze proofed.

While I was there I changed the front lambda sensor again...to no avail...the light is still on....

To cap it all, the drivers door window went down all the way, but refuses to go back up.

problem is if the floor is satuarated and any connectors are wet, then theres a risk of corroded and broken connections... as we found with a xantia that had partly filled with water ..
1990 H reg V6 24v Manual .. in progress.. on SORN
Projects:
92 L Xm 2.1t D auto project
Others
07 c5 2.2 hdi 173bhp manual
Top

There was originally some water collecting in the boot, but the interior appears dry. The car is now in the garage, so definitely isn't getting wet now.

I'm not really bothered about such items as the window not responding properly, but the lambda sensors are driving me to distraction. There is definitely good connection between the sensors and ECU, but the voltage readings are abnormal. Bizarrely, the fault appears to have moved from the rear sensor to the front one after replacement with good sensors.

Nearly forgot. The hydro belt is also now trying to self destruct again due to there being no tensioner screw (chirp, chirp, chirp), so it's impossible to get enough tension on the belt before locking it off. That situation isn't helped by the flange on the head the screw should act on is broken.
I'll fabricate one to work in a different way.
Another option might be to obtain additional cam and pump pulleys and weld two together to provide greater drive requiring less belt tension.

I have read these posts with interest. Thanks to Dieselman and all who replied.

My Year 4 early Series 2 XM Petrol 2 litre turbo hatchback is now giving the fuel gauge problem mentioned by Dieselman. The fuel gauge works normally on start up but after a few miles the gauge goes to full and the low fuel warning light flashes rhythmically. The right hand display will not show distance remaining before the fuel runs out. After turning the engine off, the problem disappears on re-start but comes back after a short time.

I have disconnected the plug to the fuel pump under the back seat, cleaned the plug and socket with contact cleaner but it has made no difference.

Any thoughts will be greatly appreciated. Many thanks in advance