Today I have wasted the afternoon fabricating a tensioner bolt for the LHM pump. I still cannot get the belt tight engough. It initially chirps under load, then starts to burn up.

Dean.
Did you finally get yours to work properly, if so, what length belt did you use and how did you get it to stop slipping?

Will, It was the Oe spec belt, 10mm X something, you posted the link up to it a while ago and i bought two but the real fix was another pump that didn't have a knackered pulley.
This setup is the worst of all the V belt driven pumps though, it needs to be pretty tight and the pulleys need to be good and shiny, ie you really need to strip a few belts if the pulley is rusty or painted before it can grip.

This may be a bit controversial but the setup is just very borderline in its ability to cope with the load. I looked at setting up a double V belt but there is not enough clearance for that or a ribbed belt.

To investigate the friction issue, has anyone tried some V-belt conditioning spray (eg LiquiMoly 4085)?
The stuff works - stops slippage, quietens the belt, and its effect can last a good while.
Have used it successfully on vehicles and workshop machinery.

I would say that the most likely cause of this issue is pulley wear, caused by historical under- or over- tensioning of the belt. A worn pulley can only be cured by replacement, or (if feasible) re-machining to the correct angle.
1999 XM Exclusive V6 24V ES9 Manual (LHD) 105,000 km
1997 Xantia Exclusive V6 (RHD) 45,000 miles
Top

Unfortunately these pulleys are two pressed steel sections, the material thickness is not large enough to allow machining in my view so replacement is the only option but dont write it off untill the pulley faces are clean and contaminate free.

The pulleys are not worn, it's just the load is too great for the drive friction, hence the pump pulley was changed from 86mm to 100mm, in an attempt to reduce the gearing and load.

As Dean says, as long as the belt is very tight, the grip is ok, but if the belt is allowed to slip at all, it is soon overheated and shredded as the pump slows significantly.

The problem stems from the pump being cam driven instead of crank driven, so the drive pulley is running at half speed, but the pump needs to run at full speed, so has a small pulley. There isn't enough space to install a larger camshaft drive pulley.
Overall, it's very unsatisfactory. A secondary tensioner device should have been employed to increase the percentage of pulley the belt is in contact with.

I've fabricated a tensioner. It's not pretty as it was all done on the fly as a trial, but it works.

The main issue was that the shoe cast into the cylinder head for the tensioner bolt to act on, was broken off, so I've had to think of a way to replicate that.
I made a small angle piece with a socket made from a drilled out nut, welded on. This then had to somehow be fitted so it wouldn't just fall off the snapped off flange.
I welded a piece of threaded studding onto the angle and fitted a nut at the appropriate length and was able to locate the nut on the inside of the tensioner through bolt flanges on the cylinder head.
After that it was a case of make a long bolt with a nut mounted vertically so the tensioner bolt can pass through and into the socket.

This would have been impossible to do with the hydro pump mounted, so I removed it. Unfortunately, the mounting bracket has to be removed from it's operational position to remove and refit the pump...which means fitting the tensioner hardware has to be done in situ, which is behind the pump, close to the firewall.
I realised I hadn't changed the belt from the 700mm one to the new XPZ 670mm, so fitted that as well.

Due to the tensioner shoe retainer bolt using the bottom of the adjustment slot, it is impossible to fully lower the pump, which made fitting the belt difficult. It required to be mainy fitted then turn the engine over to wind the belt on.

It doesn't squeak or slip at all.

I may revisit this to tidy it up a bit now the concept has been proven. Next time I would MIG the welds instead of ARC welding them. Much neater, although I didn't bother fettling anything before fitting it as this was a trial.

It doesn't squeak or slip at all.

The shoe sitting on the broken off flange. 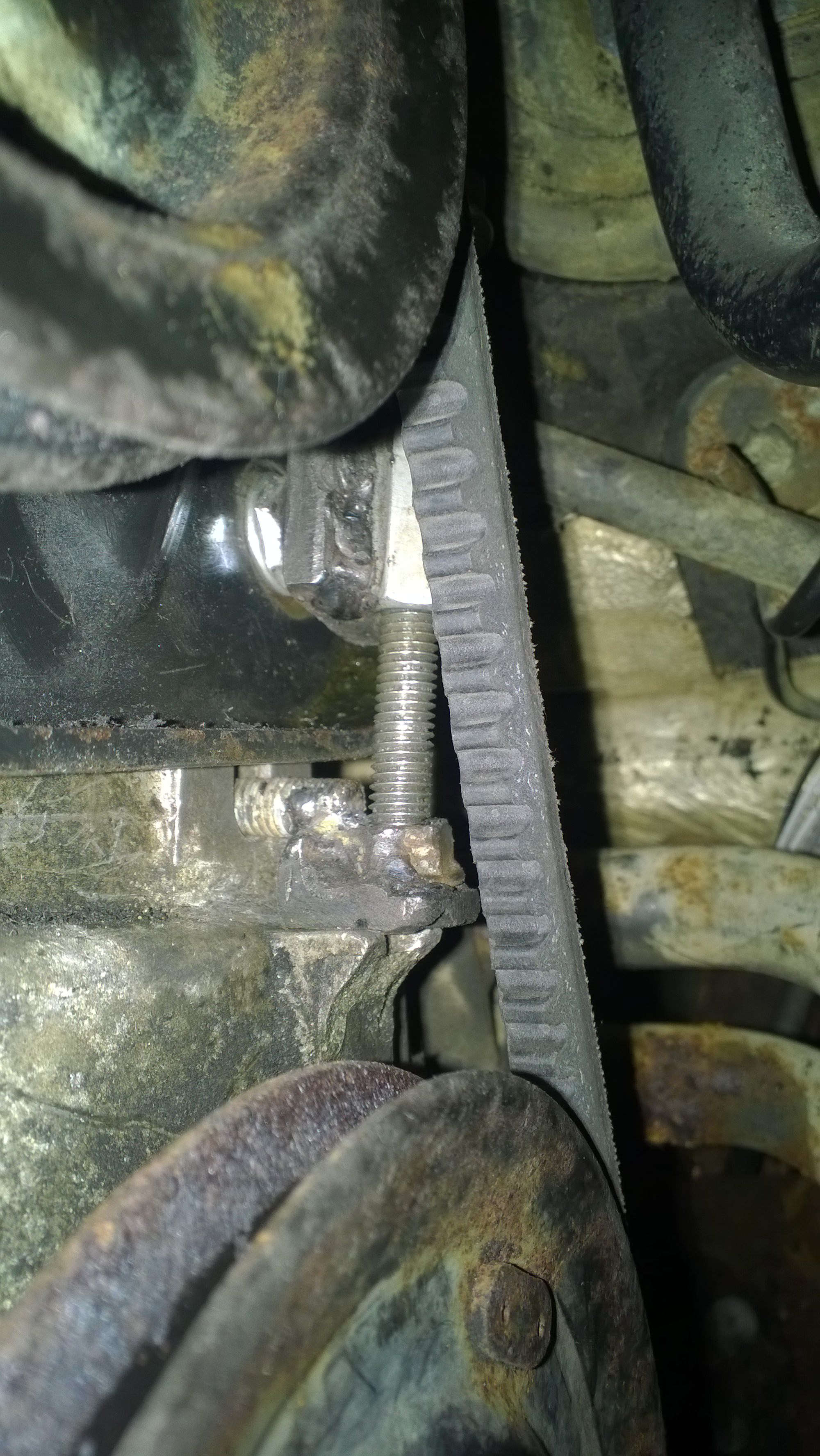 The final tensioner in use. 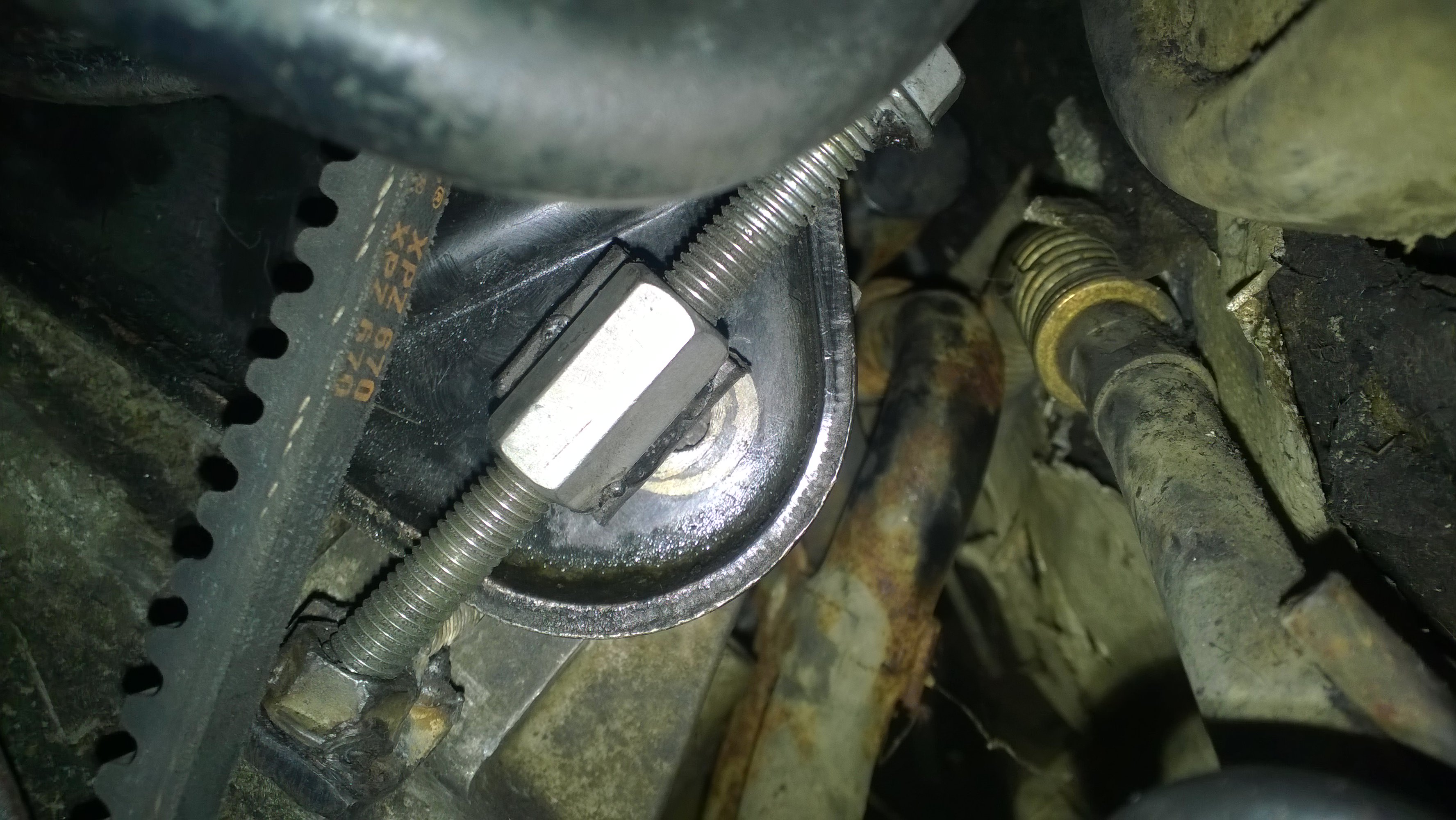 In reality there is no visible rust on the insides of the pulleys. The very outer section isn't where the belt runs.

I am prepared to run this and see how much it wears the belt/cleans up the pulleys. Belts are a couple of pounds and I have a spare already.

Not sure if this can be done on a 24v, may only be do-able on 12v, but I once had a conversation with someone at Pleiades about removing the air con pump and putting the hydro pump in its place so it runs off the crank, some fabrication (& maths) required...... running the hydro pump of the rear cam was always a bad idea !
Top
Post Reply
257 posts