New to the forum? Feel free to introduce yourself / your cars. Also have a look for any frequently asked questions and information.
Post Reply
18 posts

First let me say this is one awesome forum. Thanks a lot to all on here, as the users make the forum. And the knowledge on here about XM's are priceless! And the enthusiasm.... Just great.

Later in my 30's I inherited my late granddad's XM 2,0i -90. It has now done 225.000km. Dont remember the orga, but it's produced in June if memory serves me right. It was the first XM to arrive in my home town, and was a demo car at the local dealer. My Granddad bought it in -91. I love it, because of sentimental reasons, but also because its a basic no-nonsense version. 2,0i, manual, electric windows in the front yes, but no aircon, no hydractive, it's just a good looking, spacious ride with no problems. Unfortunately it has a sunroof, but never had any issues with that. This car lived it's life with my granddad on the countryside, and because of that has no rust what so ever. A few dents here and there, a big one in a front wing and a damaged front bumper corner. But it's not a problem. It has NEVER caused problems during these 31 one years and 225.000kms. Not a single electrical problem. Never water leaks. Never engine problems. Nothing. It just starts and do what it does best. Eat bad roads for breakfast. Only work on the car other than service and front suspension items, are the clutch once. Spheres twice. The two exhaust pots once. And the valve in front of the engine for the servo steering once. Oh yeah, also a few years ago I changed the valve seals on the engine(they were hard as plastic!), that got rid of the oil consumption. And the only hydraulic leak, the pipe to the front right hand suspension sylinder started leaking. I replaced it with a brakepipe from a 2CV at no cost as I have everything for a 2CV in my storage. And working on it is mostly a laugh, space everywhere. Makes life easy

This summer I rubbed and polished it for the first time since the late -90's. Wow! One could hardly recognize the car! Wonderful it is. 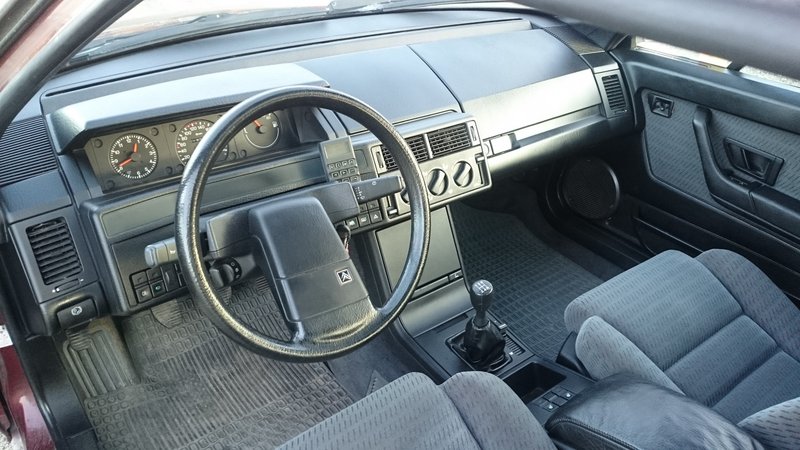 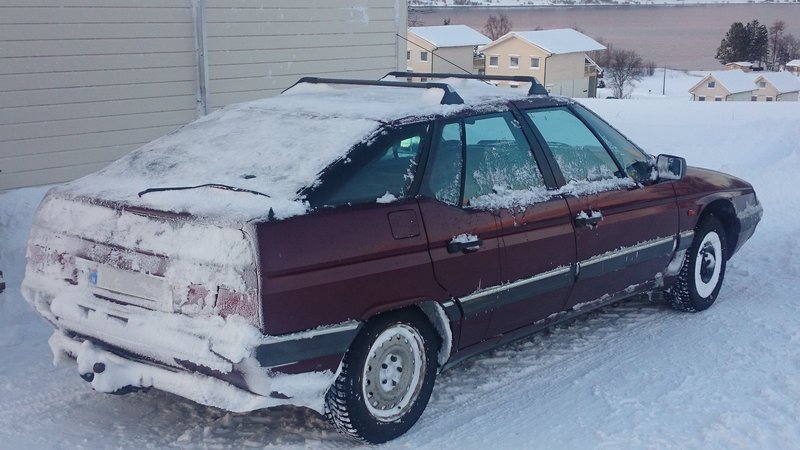 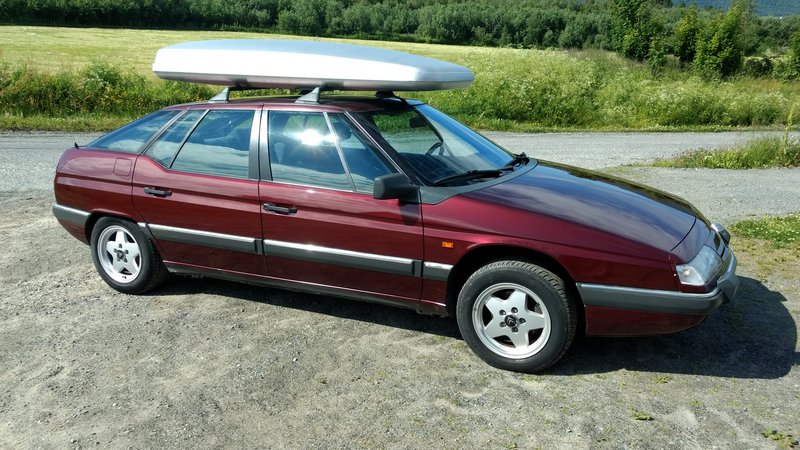 Lots of old Citroëns(Only DS,CX,BX,XM and 2CV's. Those are the only models I care about) have been acquired over time, and I now have quite a collection as I'm not good at selling stuff. Although because of space limitations, many has been sold, and even some scrapped. I have chopped soooo many CX's and a few DS's. I'm ashamed about it, but one has to remember it was when there was plenty"ish" of them. At least I got to know them well. Every nut and bolt, and there's alot. But still the collection has just grown, as my signature shows. Totally bonkers!

Latest car in my fleet is a 1996 XM 2,0i 16V auto Break. I went to the scrapper a few weeks ago looking for a plastic detail for one of my cars. Outside the scrapper stood this XM looking great. I made a joke to the guy at the counter, asking if it was going to be scrapped. He confirmed it and I was like WHAAAAAAAAAT?!?! It looks waaaay to good to be scrapped. So the guy jokefully said I should call the owner and buy it, because the paperwork for the scrap-thing wasnt done yet. I left and 30 minutes later I came back and told him the car was now mine, and I'd be taking it with me home

He was quite surprised HAHA. He obviously didnt know how crazy Citroen addicts can be

It was road legal and licensed, but as nobody was free to help me, I took it home alone by trailer. This car is the reason I'm on this forum now, it sparked some really nostalgic feelings in me. I know these cars well from the 90's and 00's. I was more into CX that time, and I drove DS and CX for the most part from -90 to 2010. Been driving 2CV's from 2010 to present. But I remember the XM series 2 well, and often thought some day I would have one. When the price was right. (Free) Now is that time, and fate made me cross path with this doomed car I managed to save in the nick of time. It literally had two wheels in the grave. When I sat in the car the first time at the scrapper, the all familiar, nice looking interior, those super comfy seats, and that special, great smell that only XM's have(which really sparked my memories from 20 years back), made me want the car instantly. It was ment to be. I dont need it, I dont have space for it, but I wanted it. Even if only for the trips down memory lane. Cant wait to do some work on it! 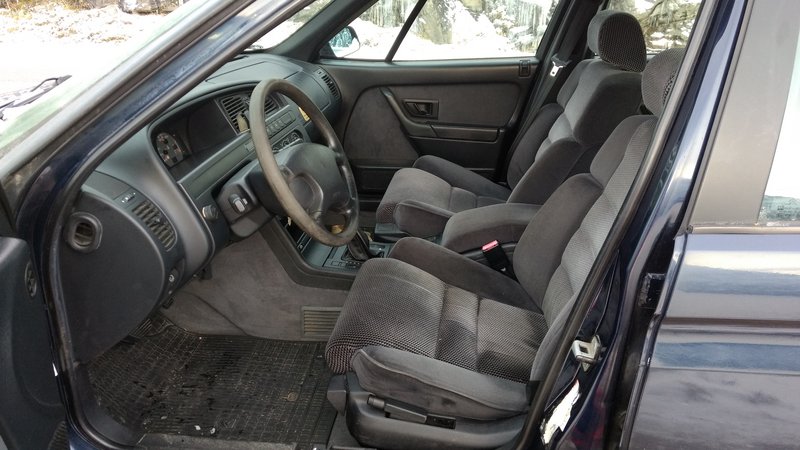 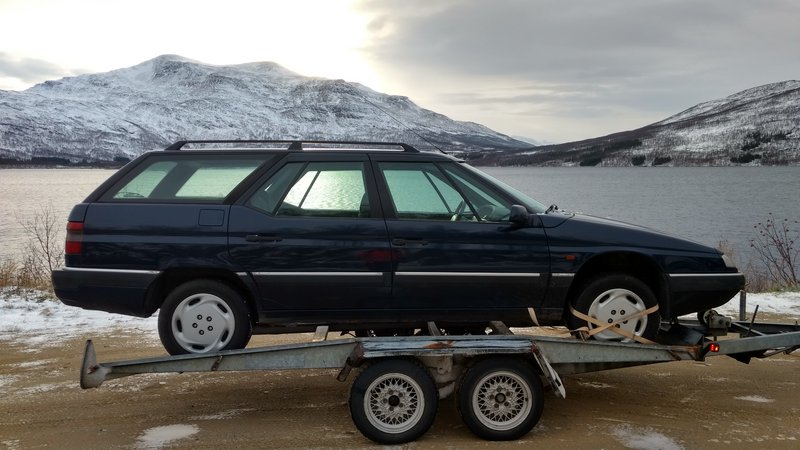 So because of this "scrap scheme survivor"(It surely has earned the sticker), I have been googling XM stuff and found this site. And it seems to be active! The sad fact is, that car forums like this are dying all over the internet. Facebook are killing them off, one after the other. I've been a member of 4 different forums since 2005, and they have almost no activity now. People dont understand the great thing about a forum, having threads and topics and be able to go back and find stuff at a later point. Each thread is like a blog! Posts on Facebook are just consume and forget. Like everything else today, I guess.
So happy about this one. Thumbs up

I'm an admin on citroen xm chat room on fb. Which is fairly active. I now post here and there. But we have and are dooing our best to keep this one going there is loads of information here.

That's Xm has to be an 89 or 90. Come late. 90 into 91 all models then got power mirrors. The sunroof could well be a. Dealer added roof. 1989 and 1990 cars in uk in i spec and Si spec cars didn't have sunroofs and dealers added them. They look different to factory fitted ones.
Projects:(eventually if theres any bodywork left)
92 L Xm 2.1t D auto project
Others
In use.. 1995 M reg S2 2.1td auto exclusive
Top

this car is the super stripped out "Taxi" spec Xm... no Hydractive, no spoiler, no power anything, no rev counter.

What a fantastic first post, shades of how we live...saving Xm from the grave, not very good at selling things...

As you say forums win hands down over Fb groups, because each thread has a seperate, indexed topic.

I must say the difference between the same posts. Pictures for example can be put in order in line on a forum.. . On a fb post they go at the end of each post.. And half the tone you can only do one picture per post.
Projects:(eventually if theres any bodywork left)
92 L Xm 2.1t D auto project
Others
In use.. 1995 M reg S2 2.1td auto exclusive
Top

this car is the super stripped out "Taxi" spec Xm... no Hydractive, no spoiler, no power anything, no rev counter.

Everything was an option, sunroof and mandarin-nacre pearlescent paint...of course Sir.

Just noticed, it has ultra basic spec, but sunroof AND manual, heated seats.

Hello, and welcome.
A great first post! The S1 is an intruiging one for the UK - not used to seeing basic-spec models . . . but, as you say, less to go wrong!
The sunroof is the booby-prize, though.
You have the best of both worlds: a BX-like XM, and a S2 for extra fun and a different sort of ride.

We've done our best here to build up a detailed knowledge-base for the car, and to amass a library of repair and service documentation. If you've been browsing the forum already, you'll have found a good bit of it already. We try to answer queries quickly, so do shout if you're in need of info. We also have access to Citroen's (Servicebox) Parts database, which can be useful in tracking down NFP items from various sources, and checking out individual car characteristics/spec ex-factory.

Interesting what you say about rural cars managing to stay free from rust. In the UK, the roads get heavily salted every winter, so cars in the North need thorough waxing/protection if they are to survive. (Here in Andalucia, less of a problem!) Our 2.5 has ploughed through a good bit of Scottish winter snow more than once - reassuringly stable and grippy.
Chris
1996 XM 2.5TD Exclusive RP7165 Polar White
1992 BX19D Millesime RP5800 Sable
1989 BX19RD Delage Red Deceased; 1998 ZX 1.9D Avantage auto Triton Green Company car 1998..2001; 2001 Xantia 1.8i auto Wicked Red Company car 2001..2003
Top

Thanks guys for the welcome. Yeah, I have already checked out the forum, and the manuals and stuff. I have my own collection so always looking for manuals for old Citroens. Some great threads here, read a few threads already, like Stickfingers battle with his valves in the 2,1. Dont we all know what struggle it can be sometimes, dealing with these things.


this car is the super stripped out "Taxi" spec Xm... no Hydractive, no spoiler, no power anything, no rev counter.

Everything was an option, sunroof and mandarin-nacre pearlescent paint...of course Sir.

I know! Isnt it cool

Have to save a few of those too for the future

As a demo-car in my hometown in 1990, maybe they wanted to show how cheap you could get a XM, but ordered with the sunroof to spice it up a little. Who knows. I do think its factory fitted. I can take a photo of it later sometime.
The heated seats were on ALL cars coming to Norway. I think even the BX always had heated seats for this marked, regardless the specs of the car.
Scandinavia had some special deals regarding specs on cars. Heated seats, headlight wipers and/or washers and spheres for cold countries, to mention a few.

About the cars surviving in the rural areas in Norway is all down to less road salt. Some rural areas dont use road salt at all, like where I am from. And adding to that, in the north there might be long periods of minus degrees during winter. And stuff dont rust when its cold, as the air becomes really dry.
So rural cars in the north last a LOT longer than other cars when it comes to rust. Except if parked close to the sea year round. Because if so...

Btw, have you guys seen this type of XM? 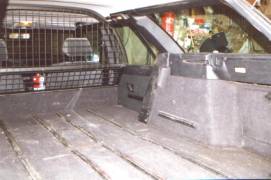